Burlington basketball season kicks off with fundraising and fun 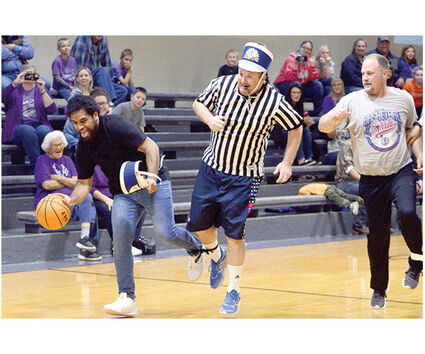 Music instructor, Isi Ofiu, and Principal Gerrett Spears, work together on the court with legs tied together, assisted by Superintendent Kevin Brown.

Basketball season is back and in full swing. Burlington basketball had the first ever "10 Quarter Games" to kick their season off. The games were used to collect donations to support the basketball teams. Fans were able to donate for different things to change the games, including options such as players being tied together, players and coaches wearing dresses, or adding points to the score.

Shortly after the games, players and fans gathered at Burlington Fire Station for the Purple Pride dinner, along with the bonfire.

The girls' basketball team won big against Cimarron in their first ga...