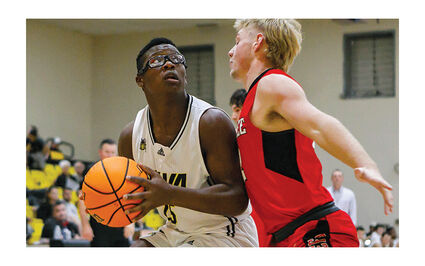 Alva's Lantz Mather (25) looks to the goal over Cherokee's defense.

The Alva Goldbugs overpowered the Cherokee Chiefs Friday night in the second round of the Alva-NWOSU Shootout to win 55-21. Alva went on a 29 point run before the Chiefs could get on the board. The Goldbugs are playing without Chuck Shelite who has a shoulder injury. With the early lead, a lot of younger Goldbugs saw playing time, giving the starters a rest.

As the quarter opened, Jackson Feely made a three-pointer for Alva. Kyler Penco and Austin Reed took over the scoring with Penco making seven points and Reed nine. Reed had a trey among his shots. Weston Tucker added two baskets and Drew Glass sank a trey during the 29-0 run.

Damien Ramirez went to the free throw line, scoring on both shots for Cherokee. Phillip Randall finished out the quarter with an Alva basket. The Goldbugs led 31-2 at the end of the first period.

Lantz Mathers opened the Alva scoring in the second quarter, scoring on an assist from Randall. Kolby Roberts hit a deep three-pointer for Cherokee. Randall scored on a stick-back. Mathers followed with another put back. Alva led 39-5.

Cambell Gaisford made a basket for Alva. Gabe Wyatt scored for Cherokee, and Ramirez hit a free throw. Aiden Faison finished out the quarter with a trey for Alva. The Goldbugs led 44-8 at halftime.

With the early lead, the Alva starters enjoyed plenty of rest as Coach Shane Feely substituted frequently. In the third quarter, the Goldbugs scored only three points while Cherokee made eight. Ramirez scored a basket for Cherokee to open the quarter. Daylon Malone made a free throw and Mathers made a basket for Alva. Gabe Wyatt and Roberts each made three-pointers for the Chiefs. At the end of the third period, Alva led 47-16. 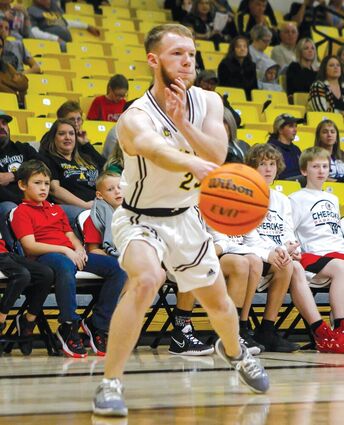 Alva's Drew Glass (23) passes the ball to his teammate under the basket.

Jaydan Peterson got on the scoreboard for Cherokee with a three-pointer, and Wyatt added a basket.

Goldbug scoring was led by Penco and Mathers with 10 each. Reed had nine and Faison five. Randall, Tucker and Longhurst had four apiece. Feely and Glass each had a trey. Gasiford scored two and Malone one.

The Alva Goldbugs are now 5-0 for the season. They moved into the finals at NWOSU, playing for the championship against Wynnewood Saturday night.

The Cherokee Chiefs were scheduled to play Seiling in the third place game Saturday.