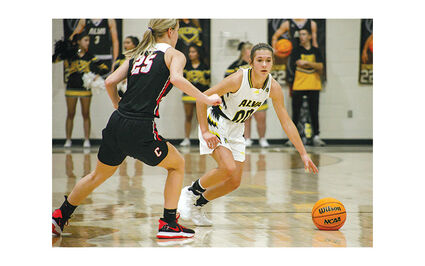 In the second round of the Alva-NWOSU Shootout, the Alva Ladybugs took charge of the game with the Cherokee Lady Chiefs Friday night. Alva defeated South Barber in the first round while Cherokee beat the Alva JV team to advance to the semi-finals.

The Ladybugs jumped out to lead 15-4 in the first quarter Friday night. Cherokee rallied to score eight points in the second quarter but Alva led 29-12 at halftime. With only eight players, Alva couldn't rotate in younger JV players since they made up another team in the tournament. The Ladybugs led 39-22 in the third quarter despite Gracie Leslie's nine points for Cherokee. The final was Alva 47, Cherokee 31.

The Ladybugs scored first on an impressive three-pointer by Chloe Durkee. Maryanne Heim grabbed a rebound and stuck it back for two to put Cherokee on the board. Alva then went on a 12 point run beginning with a Brooke Perez jumper followed by freshman Lakin Gaddy's trey. Perez stole the ball and went down the lane to score. Durkee sank another triple. Perez grabbed an offensive rebound and put it through the hoop. Alva now led 15-2.

Carson Schanbacher hit a basket to add two more for Cherokee. Both teams attempted more baskets that didn't go in. At the end of the quarter, Alva led 15-4.

Hallie Hamilton was fouled and made one of two free throws. Then Hamilton sank a three-pointer. Schanbacher finished out the scoring with a Cherokee basket. At halftime it was Ladybugs 29, Lady Chiefs 12.

Third quarter scoring opened with a basket from Gaddy. Mary Kate Foster was fouled and made both free throws to get in the scorebook. Leslie answered with a stick-back basket and was fouled. She missed the free throw. Schanbacher was next at the charity stripe, making one of two shots. Leslie scored on another basket but missed the follow-up free throw. The Ladybugs led 33-18.

Perez widened the Alva lead with a basket. Leslie scored on her own rebound. Perez was fouled and made both free throws. Leslie again scored a basket. Durkee picked off the ball and took it to rim for two. The third period ended with Alva leading 39-22.

Despite Alva's continuing lead, the Cherokee Lady Chiefs didn't slow up. Leslie opened the fourth making two free throws. Hamilton was fouled by Leslie, her fourth, and went to the line to make both shots. Leslie went to the bench with Alva leading 41-24.

Lady Chief Lexi Williams earned her fourth foul, sending Perez to the charity stripe for a one-and-one. She made both shots. Hamilton stole the ball and scored. Alva's lead was now 45-24. 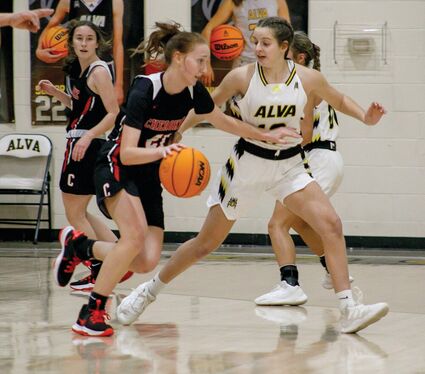 Cherokee's Riley Hensley got on the scoreboard with two free throws. She followed that with a basket. Perez scored for Alva. Leslie was back and made a final basket before the game ended with Alva winning 47-31.

Alva seniors Perez and Durkee led the Ladybugs in scoring with 16 each. Hamilton had eight, Gaddy five and Foster two.

The win gave the Ladybugs a 5-0 season record as they moved into the championship game against South Central Saturday night.

The Lady Chiefs were playing without Abby Guffy who injured her knee in the game with Billings earlier. Cherokee moved into the finals to meet the Wynnewood team and decide third place in the tournament.