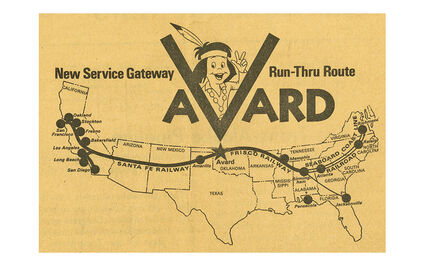 This is the top of a one-fourth page ad featured in the Sept. 18 issue of the New York Times, and in the Washington Post, two of the largest newspapers on the east coasts. The ad will run in other newspapers all over the coutnry at a later date, thus putting Avard on the map for sure. (From the Enid Morning News, Sept. 30, 1972)

A Woods County resident who wishes to remain unidentified stopped by the newspaper office recently. She was cleaning out a house in the Avard community when she came across a newspaper clipping from 1972 that had been carefully preserved.

Titled "Little Avard Makes Big Time News," the yellowing article from the Sept. 30, 1972, Enid Morning News relates the story of a new railroad development in Avard. It is accompanied by a photo of Avard as it looked in 1972 and a portion of an ad about the new railroad link-up.

In 1909 Avard, located halfway between Alva and Waynoka at the intersection of County Road 370 and Ellis Road, was a bustling small town of 250 people. The first post office was established in Avard on June 1, 1895, and closed on Nov. 22, 1963. The town was incorporated in 2904 when the Frisco tracks were extended westward from Enid to tie in with the Santa Fe. The town was named for Isabell Avard Todd, the postmistress.

Avard had the customary frontier business establishments, grocery and hardware stores, hotels, restaurants, barber and blacksmith shops, livery stables, saloons, grain elevators, and the Avard Tribune, a weekly newspaper. It was an important rail transfer point for freight and passengers from 1910 to 1930.

For years the broomcorn warehouse had a thriving business. It was reported that farmers were coming from as far as forty miles away to sell their broomcorn to Avard's Gerlach Mercantile Company. In 1904 the newspaper reported that thirty-two wagonloads of the product, valued at one thousand dollars, had been delivered to Gerlach's warehouse.

The town declined as the result of the nation's economic depression in the 1930s, the devastating drought and dust storms of that era and tornadoes that struck in 1943 and 1944. Avard's public school district graduated its last class in 1968 as a result of consolidation.

Unfortunately, the railroad development didn't cause a rebirth in the town. By 1990 Avard's population had dwindled to 37 residents. The 2000 census recorded a population of 26, and in 2009 it had dropped to 19. Avard dis-incorporated in January 2010.

Here's the text from the Enid News article written by Les Thomas:

Not many towns the size of Avard, Oklahoma (population 53 or 54, they're not sure which) get publicity in two of the country's largest newspapers, and will undoubtedly be in more large newspapers in the near future.

On Tuesday, Sept. 18, the New York Times had a one-fourth page ad in it calling attention to the New Service Gateway Run-Thru Route and featured Avard as the place where Santa Fe Railroad links up with the main line of Frisco.

The ad also ran in the Washington Post. Frank Young, vice-president of Advertising Direction, Inc., Chicago, says the ad will undoubtedly run in several other newspapers, especially on the east and west coasts.

The trial runs of Frisco's mainline which runs through Enid on its way between Richmond, Va., and to Richmond, Calif., was started Aug. 1, after Frisco had spent in excess of $4 million upgrading its lines between Tulsa and Avard.

"Santa Fe's mainline link-up for shorter and faster run-through service with the Frisco Railway on the Avard Route provides advantages for the more efficient through movement of freight across the southern section of the nation," said Gil Sweet, regional manager of public relations for Santa Fe, which is the company running the ads.

"This new gateway replaces the route through Floydada, Texas, and provides a direct Santa Fe Mainline link-up with Frisco's modernized Avard line. It provides the best of both railways' operation with pooling of locomotives and cabooses for direct run-through service. Advance car and operating data speeds trains through interchange with no delays," Sweet said.

The change-over of the Frisco mainline was announced July 21 by J. H. Brown, vice-president in charge of operations for Frisco Railway.

In making the announcement, Brown said the new route through Enid from Tulsa in Avard would be 80 miles shorter and would provide a greater dependability of service for Frisco customers.

Before the switching of the mainline to Avard, the line between Enid and Tulsa had been a secondary line over which the Frisco had been running two trains daily and the line from Enid to Avard, a branch line which was used only when it was needed.

When the line gets into full service, citizens in the various towns along the Tulsa-Avard route who have been accustomed to seeing infrequent freight trains or trains performing local service, will be witnessing the daily run of six or more freight trains on their way between the east or west coasts.

One of the big advantages of the new freight service will be the fast movement of perishables from the west coast to the east coast. Fruits and vegetables which formerly had to be moved mainly by truck now have a fast freight service. The new mainline is a savings of both time and money.

On August 1 of this year, a train crew from Enid went to Waynoka, picked up an east-bound train and took it to Tulsa where they turned it over to another crew and brought a west bound train to Enid – the first trial runs on the new route.

"The switch from Frisco lines to Santa Fe lines takes place at Avard, but the actual crew switching will be done at Waynoka. Avard is where the tracks of the two railways come together," Sweet said.

Regardless of where crews are changed, the route is referred to as "the Avard route" by shippers on the east and west coasts as well as both Santa Fe and Frisco.

There will be a lot of traffic now through Avard, although it will be of the train type and not the automobile type. When the line gets into full service after the preliminary runs are finished and final schedules are complete, a minimum of six trains daily will be switching from Frisco to Santa Fe and vice versa at Avard. 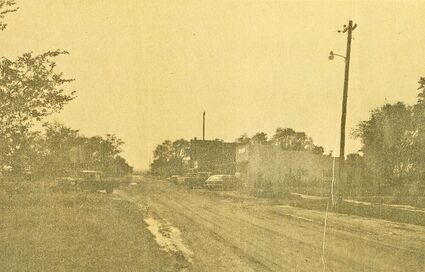 In earlier days, the town of Avard was much larger than it is today. It had grocery stores, a good-sized hotel, general merchandising stores, cafes and as one man happily recalled, "two saloons". Now, a cafe, small grocery store and elevator is about all that's left. But the Santa Fe and Frisco railroads are again putting Avard on the map.

That link-up of railroad line in Avard was the basis for a new development in Woods County. The idea of a regional rail park began in 2004. The 508 acres of land immediately east of Avard, where the two rail lines joined, was purchased, and a 6,000 foot side rail was built to accommodate a train as long as a mile.

To fund the park, the area was made into a TIF (tax increment financing) district. Alfalfa Electric Cooperative applied for and loaned to the rail park an economic development loan from the U.S. Department of Agriculture. Those funds were used to purchase the land. In a meeting in January 2021, the rail park authority said the entity was now debt-free.