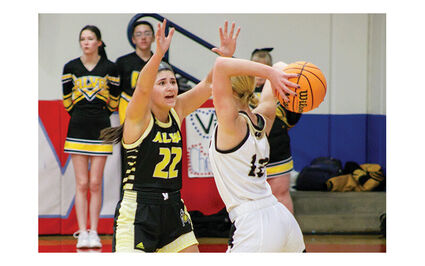 Having worked as an assistant coach at Woodward before coming to Alva, Ladybug head coach Kris Gore probably had some insights into the their program. But that wasn't enough to overcome the size advantage the Woodward team had over Alva.

Meeting in the first round of the Wheat Capital Tournament at Chisholm, the teams played fairly close in the first quarter. Woodward increased their lead from 14-11 to 26-18 at the half. In the third quarter, Woodward scored 15 points to five for the Ladybugs, and Alva just couldn't catch up. Woodward won 57-34 sending the Ladybugs into the consolation side of the bracket.

Brooke Perez scored on a jump shot to end to the Woodward seven-point run. Chloe Durkee sank the first three-pointer of the game to tie the score at seven. Pfeifer made a basket to put Woodward ahead by two. Porter increased the margin with a free throw, and the Boomers now led 10-7.

Jaycee Kelln scored an Alva basket on an assist from Hallie Hamilton. Foster had a nice steal, but Alva couldn't get the trey to fall in. Pfeifer increased the Woodward lead to 12-9 on a layup. Kelln scored another basket, but De'tynne Lewis scored before the buzzer to end the quarter with Woodward on top 14-11.

In the second quarter, a foul put Jissele Hagemeier at the charity stripe for Woodward. She made one of two shots. Foster scored on a jumper to put Alva within two points of the lead. Then Pfeifer scored on a basket and was fouled. She made the free throw, and Woodward led 18-13. O'Handley widened the margin with a basket.

Kelln made a basket but a foul on the floor before the shot negated it. Lakin Gaddy scored a basket for Alva, but Pfeiffer made two straight baskets to increase the Boomer lead to 24-15. Porter went to the free throw line and made both shots to add to Woodward's lead. In the final score of the half, Chloe Durkee sank a shot from three-point range. At halftime, Woodward led 26-18.

During the first half, Woodward went to the free throw line 11 times, making eight points while Alva did not go to the charity stripe at all. The number of Alva players with fouls was concerning due to the shallow bench. Coach Gore had only eight players since the JV team was playing in the Oil Center Classic at Woodward.

O'Handley was first to score in the third quarter followed by a basket from Kelln for the Ladybugs. Woodward then went on a 13 point unanswered run with three baskets by Pfeifer, one from Bryleigh Douglas-Fischer and one by O'Handley. Lewis topped off the ten points with a trey.

As time ran out in the quarter, Gaddy scored for Alva and was fouled and made the free throw shot. At the end of three, Woodward led 41-23.

In the final period, Kelln's basket was blocked sending her to the free throw line. She made one of two shots. Kelln was fouled again, this time getting a one-and-one. She hit both to increase Alva's total points to 26. Porter scored on a basket and scored again on an offensive rebound and put-back. Kelln made another Alva basket, and the score was Woodward 45, Alva 28. 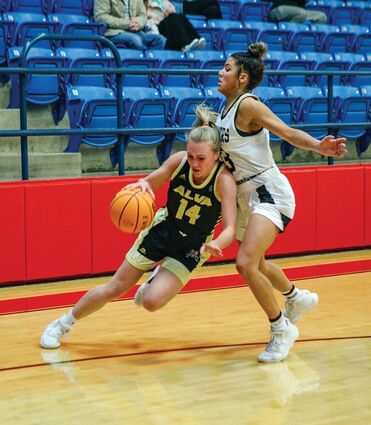 Porter went to the free throw line, making both tries. Perez scored an Alva basket on an assist from Hamilton. O'Handley answered with a basket followed by one from Pfeifer, and Woodward led 53-30. O'Handley (6 ft. 3 in.) went over Perez to score again. Woodward's Averi Edwards fouled out, sending Foster to the line. She made both shots. Woodward was now up 55-32.

Douglas-Fischer scored a Boomer basket, and Foster made the last points of the game on an Alva basket. The final was Woodward 57, Alva 34.

Kelln led the Ladybugs with 11 points followed by Foster with eight. Durkee had six, Gaddy five and Perez four.

The Woodward team was led by Pfeifer with 22 followed by O'Handley with 14 and Porter with 11. Lewis had five, Douglas-Fischer four and Hagemeier one.

The Alva Ladybugs are now 7-3 for the season. They will take on John Marshall at 10 a.m. today (Friday) in the consolation semi-finals at Chisholm.