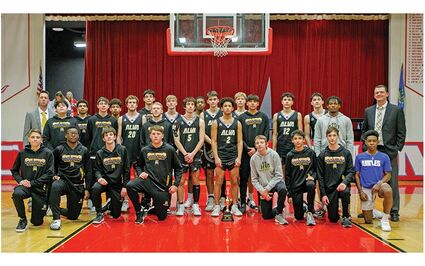 It all came down to two last-second free throws. The Alva Goldbugs and Kingfisher Yellowjackets played to a tie, but a foul called on Alva just before the buzzer gave Kingfisher a chance at two points. Both went in, and the Yellowjackets won the Wheat Capital Tournament championship 41-39.

The Goldbugs led at the end of the opening quarter 14-9. Kingfisher took a one point lead in the second. In the third quarter, Kingfisher outscored Alva 8 to 5 to lead 32-28. The Goldbugs caught up and tied with seconds remaining, but Kingfisher's foul shots took the win 41-39.

Goldbugs Jackson Feely and Kyler Penco were named to the all-tournament team as was Brooke Perez for the Ladybugs.

The Goldbugs opened scoring on a three-pointer from Penco. Maddox Mecklenburg had a chance to tie as he made a basket and was fouled, but he missed the free throw and Alva kept the lead. Braden Hofen extended the early lead with a basket, but Cash Slezickey made a basket from three-range for the 5-5 tie. Chase Davis was fouled and made one of two shots but Austin Reed hit an Alva basket to give the Goldbugs a 7-6 lead.

Jaxon Jones scored on a put-back followed by a trey from Feely and a Penco jumper. Alva led 14-6. Mecklenburg hit a three-pointer to narrow the gap. At the end of the first period, Alva led 14-9.

In the second quarter, Jones scored on a jumper with an assist from Kaden Slater. Kingfisher went on an eight-point run with Davis making a three-point basket and foul shot, Caden Kitchens two free throws and Xavier Ridenour one. The 17-16 Yellowjacket lead didn't last long as Penco scored on a Philip Randall assist. Ridenour hit a basket, but Reed answered with a trey to put Alva up 21-19.

Penco scored a basket to widen the lead, but Mecklenburg was fouled as he went for a basket from three-point range. That gave him three free throw chances, and he made good on all three to pull within one point. Kitchens hit a final basket before the buzzer, and Kingfisher led 24-23 going into halftime.

Just like the start of the game, Penco opened second half scoring with a three-pointer to give Alva the lead. Kitchens hit a basket but he traveled on the way, and it didn't count. Then Davis hit a three to take the lead for Kingfisher. Mecklenburg followed with a basket. Hofen scored on a basket, cutting the Kingfisher lead to one.

Ridenour scored on a trey to put the Yellowjackets on top 32-28. Reed sank a basket but was called for an offensive foul to negate the points. Ridenour tried for a trey but his shot was blocked by Daylon Malone. The third quarter ended with Kingfisher leading 32-28.

In the final quarter, Chuck Shelite stole the ball to give Alva possession. At the other end of the court, Hofen capitalized with a layup to put Alva within two of the lead. Kingfisher put on a seven point run with baskets from Kitchens and Ridenour plus a trey by Mecklenburg, and Alva trailed 39-30. Hofen scored an Alva basket. There was a stoppage of play as Slater took a hit and was bleeding from around his eye.

After the blood was mopped up and play resumed, Malone sank a straight on three-pointer for Alva to narrow the lead to two. Malone then took a charge for the foul and Alva possession. Feely went for a basket but the shot didn't fall through, however Reed grabbed the ball and tipped it in for the 39-39 tie. 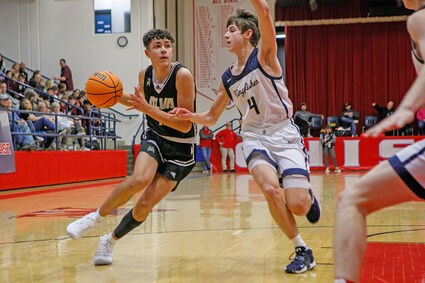 Alva's Kyler Penco (12) pushes his way through the Kingfisher defense to get to the basket.

It looked like the game would go into overtime, but just before the buzzer a foul was called on Alva. That was the seventh team foul, giving Ridenour two shots. He made both, and Kingfisher won 41-39.

The Goldbug winning streak was broken, and Alva now has an 11-1 record. The Goldbugs take home the runner-up trophy and the knowledge that they fought Class 4A powerhouse Kingfisher to the wire.

Leading the Alva scoring was Penco with 14 followed by Hofen with eight and Reed with seven. Jones had four points, Feely three and Malone three. The Goldbugs had no trips to the foul line.

The Yellowjackets have now won eight of the last nine Wheat Capital championships. Kingfisher was led in scoring by Mecklenburg with 13 followed by Ridenour with ten. Kitchens had eight, Davis seven and Slezickey three. The Yellowjackets made 14 trips to the free throw line.

The Goldbugs will play at OBA next Thursday and host Chisholm on Friday.