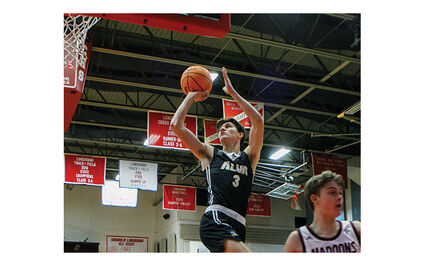 Goldbug Austin Reed (3) catches air as he shoots over the Perry defense.

The Alva Goldbugs took on the Perry Maroons in the semi-finals of the Wheat Capital Tournament in Chisholm Friday night. Having beat Perry on Dec. 17 by a 41-27 score, the Goldbugs were confident as they took the court. However, the Maroons were looking to avenge the loss and put up a good fight.

In the first quarter, it was neck and neck as the lead changed from one team to the other and the score tied three times. Alva edged Perry 10-9 at the end of the first period. The Goldbugs took over in the second quarter, pouring in 15 points while holding Perry to three for an Alva lead of 25-12 at the half. Both teams had trouble scoring in the third quarter which became a defensive battle. When the buzzer sounded, Alva led 28-16. In the final period, Perry came alive, scoring 14 points but it was too late, and the Goldbugs won 48-30.

The win moved Alva into the championship playoff against Kingfisher at 8:30 p.m. on Saturday. The Yellowjackets beat John Marshall 58-43 on Friday to advance.

Perry's Bryson Cash opened the scoring but Austin Reed stole the ball and went to the rim to tie the game at two each. Kade Webb made back-to-back Perry baskets to pull ahead. It seemed like the Goldbugs couldn't buy a basket as shots fell short or bounced back out. Finally Kaden Slater hit one from three-range to knock the lid off the basket. Jackson Feely followed with two for Alva to tie the score at seven.

Cash scored a basket to put the Maroons back on top. Austin Reed tried for a trey that didn't go in, but Feely rebounded and got the put-back. He was fouled on the shot and added another point from the charity stripe. Alva led 10-9 for the first quarter.

Both teams struggled to score as the second quarter opened. Finally Braden Hofen scored on a jumper with Reed assisting. Feely was fouled as he tried for a basket and made both free throws. Alva was now leading 14-9. Cash scored for Perry followed by a Goldbug basket from Slater. Feely added another basket, and Alva led 18-11.

Daylon Malone came into the game and broke loose for a basket. Malone was fouled on another shot and went to the free throw line, making both shots. Alva now led by 22-11. Malone then hit a nice trey from deep in the right wing. After 11 unanswered Goldbug points, Perry finally scored on one of two free throws by Dylan Hight. The first half ended with Alva leading 25-12.

The teams traded the ball back and forth for over four minutes with no shots going in. Webb finally made it to the free throw line to hit one of two for Perry. Feely drove down the lane and was fouled on his shot. He also made one of two shots. Webb went to the charity stripe again and made one of two. The score was 26-14 for Alva.

Goldbug Jaxon Jones broke the scoring freeze with a basket on a Chuck Shelite assist. Caden Hall scored for Perry, and the third period ended with Alva up 28-16.

In the final period, Webb scored first for Perry. Malone answered with an Alva basket. Hight hit a three-pointer. Feely was fouled as he went for a shot and made both free throws. Alva led by 11 at 32-21. Then Hight hit another three-point shot to cut the margin to eight.

Kyler Penco went to the free throw line, making both shots for Alva. Hofen scored on a basket, and Alva's lead was now 12. Hight hit a Perry basket, but Slater was next at the charity stripe, making two for the Goldbugs. Alva maintained their lead at 38-26.

In the final minutes, Penco went to the free throw line on a one-and-one. He made both shots. Penco was fouled again and made both tries. Alva now led 42-26. Feely collected his fifth foul and was out of the game. Hight hit one of his two free throws for Perry. 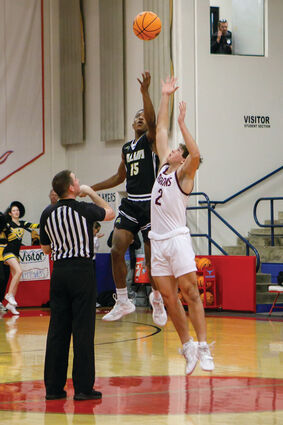 Alva's Braden Hofen (15) jumps for the ball at the beginning of the game Friday evening against Perry.

Hayden Garfield got on the scoreboard for Perry with a basket. He was fouled and made the third point. Shelite was next at the foul line. He made one shot and missed the second. However, Perry was called for a lane violation, and Shelite made the do-over. Cash fouled out and went to the Perry bench. Hofen finished out the scoring with a pair of free throws, and Alva won 48-30.

Alva was led in scoring by Feely with 12 followed by Malone with nine, Penco eight (all on free throws in the fourth), Slater seven and Hofen six. Reed, Jones and Shelite had two points each.

Hight led the Perry scoring with ten followed by Webb with nine and Cash with six. Garfield had three points and Hall had two.

The Goldbugs now have an undefeated run of 11 games. They advanced to play Class 4A Kingfisher for the Wheat Capital championship Saturday.