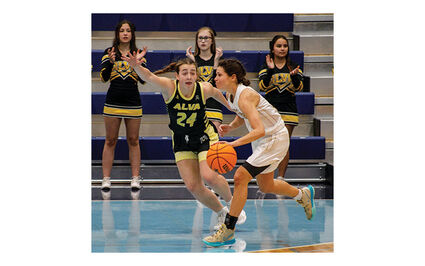 Ladybug Mary Kate Foster (24) keeps the Cashion offense from getting to the goal.

The Class 3A Alva Ladybugs took on the Class 2A Cashion Lady Wildcats in the Enid Festival Friday. Scoring was close throughout the game, but a final quarter push put the Cashion team on top 33-31.

The Ladybugs led 10-6 after the first quarter, and the halftime score was tied at 16. The Ladybugs were ahead by one point, 26-25, at the end of three, but Cashion scored eight points while holding Alva to five in the final quarter for the 33-31Wildcat victory.

Cashion led off the first quarter with a basket by center Brook Shelly. Then the Ladybugs put in ten unanswered points beginning with back-to-back scores by Morgan Heath. Brooke Perez, Lakin Gaddy and Chloe Durkee all made baskets for the 10-2 Alva lead.

Lauren Jenkins went to the foul line and made both free throws for Cashion. Shelly managed another two points before time ran out. Alva led 10-6 at the end of the first quarter.

Second quarter scoring opened with Megan Shafer at the free throw line, making one of two shots for Cashion. Gaddy sank an Alva basket and was fouled. She made the free throw, and Alva was up 13-7.

Shafer came in for a layup. Then Bella Woody hit a three to give Cashion the lead at 15-13.

A right wing three by Durkee put the Ladybugs ahead by one point. Shafer went to the free throw line, but made only one of her two chances to tie the score at 16 for halftime.

The second half began with two Ladybugs scoring. Gaddy picked off the ball and went for the hoop. Then Mary Kate Foster made a layup, and Alva led 20-16. Shelly went in for a Cashion layup and was fouled. She made the bonus shot, and Alva led by one.

Ella Suntken scored on a put-back to give Cashion the lead. Perez and Gaddy took back the lead, 24-21, with baskets. Shelly scored again. Then Fosters made an Alva basket. Jenkins finished out the scoring. Alva had a narrow 26-25 lead after the third quarter.

Lauren Lamb had the first point of the fourth quarter when she made one of two from the foul line to tie the score. Shafer added a basket, and Cashion led 28-26. Ladybug Jaycee Kelln scored to tie the game, and then Lamb hit a basket to put Cashion up 30-28. 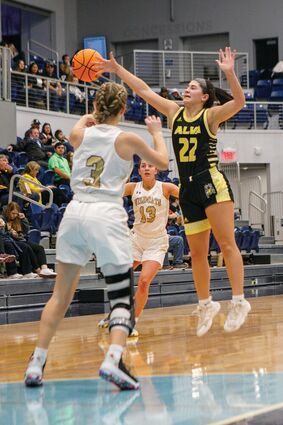 Alva's Chloe Durkee (22) tries to knock the ball away from the Lady Wildcats' offense.

With seconds left, Jenkins went for a layup. She made the basket and was fouled but missed the free throw. Cashion now led 32-31 but Alva had the ball. Cashion forced a turnover with less than five seconds left. Lamb went for a shot and was fouled. She made one of her two tries to give the Lady Wildcats a two-point margin. The Ladybugs controlled the rebound but a picked off pass took away any last second chance. The Lady Wildcats won 33-31.

The Ladybugs were led in scoring by Gaddy with nine and Foster with six. Perez and Durkee had five points each. Heath made four and Kelln two.

Cashion was led by Shelly with 12 points followed by six points each for Shafer and Jenkins. Lamb had four, Woody three and Suntken two.

With a 13-7 record, the Ladybugs will travel to Tonkawa Tuesday for a 6:30 p.m. tip-off. They'll be back at home on Friday to host Frontier.