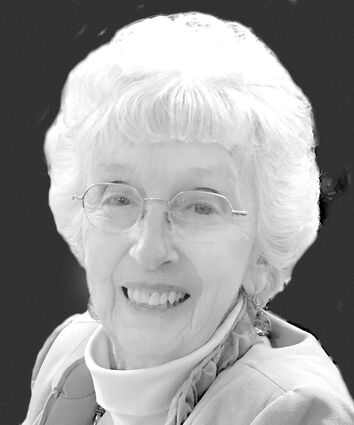 Graveside services will be 2 p.m. Saturday, December 3, 2022, at Garrison Cemetery with Pastor Chris Ruwaldt officiating. Burial is under the direction of Marshall Funeral Home of Alva.

LaVeeda (Dugan) Myers was born August 25, 1926, just two quarter sections east of her final resting place at Garrison Cemetery. The quarter section was obtained by her paternal grandmother in the landrun of September 16, 1893.

The family lived in Dacoma, Oklahoma, until their move to Los Angeles, California, in 1934. She gave her heart to the Lord during high school at a little Baptist Church in Maywood, California. After graduation from Bell High School in 1943, in that same little church, she married an old family friend, Kenneth Dean Myers, who was also born in Dacoma. They made their first home at the Marine base in Mojave, California.

The Myers moved to the coast of Washington State in 1946, with their son, Kenneth Duane, who was born in Maywood, Carlifornia. Their two daughters, Patricia Ann and Pamela Ann, were born in Seattle, Washington.

The family moved to Wenatchee, Washington, in 1964. This is where LaVeeda realized her lifelong dream of becoming a nurse. She sat for her state boards and received her LPN License in 1969.

After retirement, LaVeeda and Ken relocated back to Oklahoma, settling in Alva in 1986. The Myers' were members of the First Baptist Church, where LaVeeda team-taught the Gleaners Sunday School Class and Ken served as a Deacon. There is no record of how often she shared things prepared in her kitchen with friends or neighbors whom she felt needed some encouragement, or someone to pray with them. She invested her life in countless young women, and young men – giving them time and attention. She was a prayer warrior on behalf of many over the years. Her fervent love of her family and her Savior Jesus Christ highlighted her life.

Besides her parents, she was preceded in death by her husband, Ken, and their son, Ken Jr.

Memorial contributions may be made through the funeral home to the First Baptist Church.