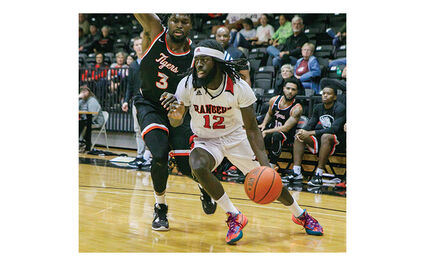 Ranger Marquise Milton (12) drives to the basket, leaving the Tiger defense behind.

ALVA, Okla. - In their home conference opener the Rangers fell to the Tigers 75-71. East Central was able to string together multiple smaller runs with a 10-0 run in the first half to lead most of the game.

Larry White led Northwestern on offense with 22 points. He was followed closely by Malik Parsons with 16. Shavaul Butters led defensively with 8 rebounds followed by White with 7.

After two minutes of scoreless basketball, Larry White opened up scoring for Northwestern, sinking a deep three pointer. East Central quickly responded with a layup and two free throws to lead early 7-3. Shavaul Butters countered with back to back dunks to tie the game 7-7 before the first media timeout.

The Tigers continued running with a layup to retake the lead. White started to heat up with a dunk to re-tie the game. Off the bench, Eric Hancik contributed a putback layup. White fired off a three pointer from the top of the key pushing the Rangers forward 14-9. East Central countered with a layup and jumper to close the gap. Brian Free took a charge, impacting Northwestern's momentum. Butters contributed a layup holding onto the Ranger lead 17-13.

Out of the third media timeout, the Tigers sank a corner three and fired off a layup to steal the lead 20-17. East Central continued their 10-0 run with a three pointer. Off the bench, Chance Love contributed a three point play and Marquise Milton fired off a layup. A dribble drive basket from Malik Parsons allowed the Rangers to close the gap 28-24.

The two teams battled possession for possession. The Tigers broke the silence with back to back free throws. Kennedy Milton countered with a layup. Jason Douglas-Stanley contributed a free throw. East Central quickly responded with a layup to extend their lead into halftime 35-27.

The Tigers continued their run to start the second half sinking a three pointer. White countered with a layup and back to back free throws to close the gap 38-31. White contributed another couple of layups. East Central quickly responded with a three point play. Malik Parsons dribbled for another layup leaving the Rangers trailing 45-39. 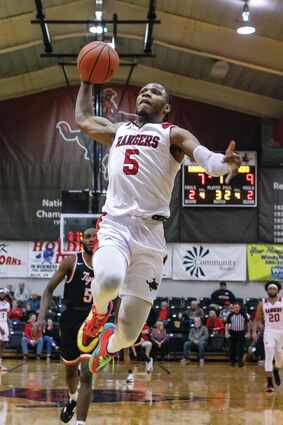 Ranger Larry White (5) goes up for a slam dunk putting two more points on the board.

A three point play from White allowed the Rangers to regain their lead 54-53 in the final seven minutes of play. Parsons furthered the Northwestern lead with a putback layup and three pointer. White continued to contribute, sinking two free throws and pushing the Rangers forward 60-55. The Tigers fought back with a three pointer to close the gap.

East Central started to take the momentum with back to back layups to tie the game 62-62 before the final media timeout. The Tigers started to heat up with back to back fast break layups. Parsons countered by sinking two free throws to close the gap 68-64. East Central countered with a floater. Parsons quickly responded with a layup and two free throws to leave the Rangers trailing 73-69. K. Milton contributed a last second layup to make it a one point game, but the Tigers continued their pace making free throws and overcoming Northwestern 75-71.