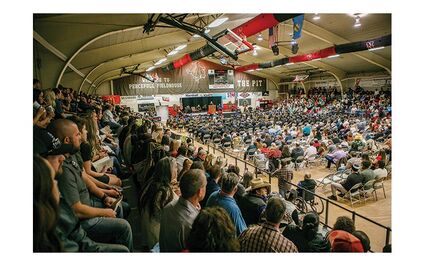 The 20th Annual Fall Commencement Exercise was an success with dozens of graduates and hundreds of family and friends in attendance.

Although the spring commencement at Northwestern Oklahoma State University in Alva is larger, the fall commencement is every bit as important to graduates and their families. Sunday afternoon, Dec. 4, those receiving bachelor's and master's degrees gathered in Perceful Fieldhouse for the ceremony.

NWOSU President Dr. Bo Hannaford welcomed graduates and guests. He offered a quote from Benjamin Franklin, "Your investment in your education always pays you the best interest."

"I hope you believe your investment here was well worth it because we believe our investment in each and every one of you has been very much worthwhile," Hannaford told the degree candidates.

Hannaford introduced guest speaker Randy Smith, an alumnus of NWOSU who was also employed for 27 years at NWOSU as a member of the faculty and administration. Smith founded the Ranger Sports Hall of Fame and currently serves on the NWOSU Foundation board as a member of the executive committee.

How Smith Became a Ranger

Smith asked the graduates to think back to the moment they decided to become a Ranger. He said he remembers that well. He played on a high school baseball team with six Division I players, but he was an average ballplayer. He didn't get much attention, but Coach Cecil Perkins from NWOSU contacted him and asked him to come to Alva for a visit.

After driving from Oklahoma City to Alva, Smith met with Perkins and was offered a scholarship that covered half of his books and half of his rent, but no tuition. "Tuition was my responsibility," Smith said. At that time, tuition was $8 per credit hour. That meant 15 hours would cost $120, and Smith wondered how he could come up with that money.

As the two were touring the campus, Coach Perkins got a call from the university president that there was a problem at Shockley Hall. He was needed there immediately. Smith explained that Shockley was the furthest west building on campus, north of Ament Hall. He went along with the coach.

"As we rounded the corner of the library, I began to see the problem," said Smith. "That dormitory was used for summer school, and about ten of our football players had taken all the mattresses out of the first floor and made a pile. They were taking turns going off the third story of Shockley Hall onto that pile of mattresses.

"Dennis Wilson was one of our receivers, and I'll never forget when he hit that pile of mattresses and rolled off, I thought to myself, 'This is where I want to come to school!' ... And they say there's nothing to do in Alva, Oklahoma."

Smith offered the graduates some keys to success although, he said, "Even if I had a recipe for success you wouldn't want it. You don't want to follow a script. You're tired of that."

He said students have spent their lives going through core curriculum and general education. "Now the rest of your life is made up of electives, and that's pretty exciting." He went on to list a few ideas for future success.

• Have a plan. "You know an idiot with a plan is better than a genius with no plan," Smith said. He advised grads to learn to network, not just by texts and emails, but in person. "There's nothing better than face to face conversation," he said.

• Be persistent. "Don't give up when things don't go right. Life is full of failures," Smith said. "If you look at the greatest people in society today, they probably had more failures than anybody. 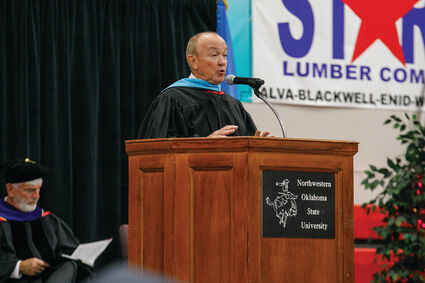 Dr. Randy Smith, a Northwestern graduate in 1975, was the guest speaker for the commencement exercise.

• Surround yourself with people who inspire you and try to make you better. "Your enemy is complacency," he said. "Be aggressive."

• Go all in. "In the game of Texas Hold 'Em, there's a term called 'all in.' That's where you think you have the best hand. You're ready to totally commit. You go 'all in,'" Smith said. "That's what I encourage you to do – whether it's your job, whether it's your relationship, whether it's your family – no matter what it is, go all in."

• Go all in as a Ranger. "Having that piece of paper ... doesn't mean you're a Ranger," he said. "I'm going to ask you to embrace this institution. Make it a part of your life from now on."

Smith's speech was short, and soon graduates were filing across the stage to receive their diplomas amid the cheers and applause from family and friends.