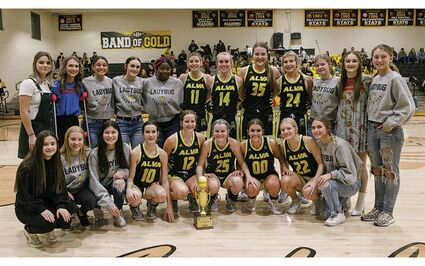 The Alva Ladybugs fell to Seiling and were named runners-up in the Alva/NWOSU Shootout Tournament.

As the Alva-NWOSU Shootout tournament reached the final day Saturday, Dec. 10, the Alva Ladybugs faced the Seiling Lady Cats for the championship honors. The Alva girls defeated South Barber 69-10 and South Central 57-25 to teach that point, but Seiling was a different matter. Seiling beat the Alva JV 68-12 in the first round and Pawhuska 85-38.

Seiling led the Ladybugs 14-8 at the end of the first quarter and extended their lead to 23-15 at halftime. In the third quarter, the Lady Cats added 19 more points while holding Alva to eight. Although the Ladybugs managed 11 points in the final period, the Seiling girls added 17 to win 59-34, taking home the championship trophy while the Ladybugs took second.

The Alva Ladybugs were led in scoring by Carly Argo with ten while Jaycee Kelln had nine and Lakin Gaddy seven. Kylie Adair and Morgan Heath added four points each.

The Alva Ladybugs were to travel to Fairview for a 6:30 p.m. game on Thursday. Tonight (Dec. 16) the Ladybugs will be at home to take on the Perry Lady Maroons beginning at 6:30 p.m. 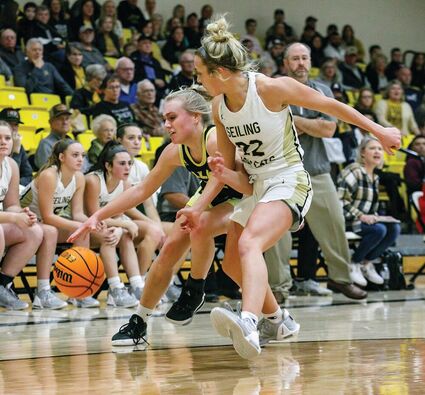 The Alva JV girls faced Western Heights Saturday morning in the seventh place matchup. The Alva JV lost to Seiling and Catoosa in the first rounds of play.

The Ladybugs took a 12-3 lead in the first period of play and were up 27-10 at halftime. The JV girls poured in 23 points in the third period while holding Western Heights to two. In the final quarter, the Ladybugs scored seven points and held Western Heights scoreless to win 57-12.