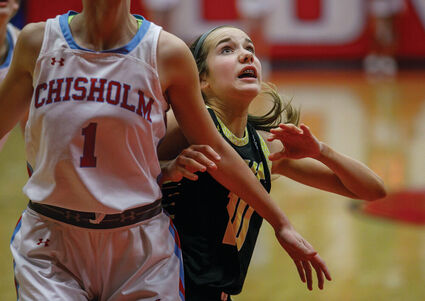 Ladybug Kylie Adair (10) keeps her eye on the ball as she hopes to get the rebound.

The Alva Ladybugs opened the scoring in Friday night's game at Chisholm and held a lead for the entire game, winning 40-22. It was a bigger margin than their earlier 37-31 win at home against the Lady Longhorns.

Sophomore Jaycee Kelln led off with a basket and a free throw. Alice Watkins answered with a basket. Despite the close defense Lakin Gaddy put four points on the scoreboard with a basket and two free throws before the Chisholm team could score again. Watkins managed a basket that rolled around the rim before dropping through the hoop. Trinity Vogt made one of two chances at the free throw line, but Alva led 7-5 at the buzzer.

Kelln led off again as she was fouled, making both free throws. Chisholm's Avery Lane threw up a three-pointer, but the ball lodged between the basket and backboard. It took the officials a few ball tosses to knock the basketball back into play. Freshman Hadlee Ohm moved through defenders to score and was fouled. She didn't make the charity shot, but teammate Carly Argo sank the first successful trey of the game. Alva led 14-5.

Watkins made one of two tries from the free throw line, and Maddie Fuksa added a basket to pull within six points of the lead. The Ladybugs went on a 6-0 scoring run when Ohm stuck back a rebound and then scored another basket followed by one from Gaddy. Watkins picked up her third foul near the end of the quarter and sat on the bench until the final period. Alva led 20-8 at halftime.

Ohm had continued success against the Chisholm defense. She led off the third quarter scoring with a basket on an assist from freshman Kylie Adair. Kelln sank a nice jump shot, and Alva led 24-8. Vogt was fouled as she made a basket and picked up the charity point to add three for the Lady Longhorns. Ohm made another Alva basket. Then Morgan Peeper put the ball in from three-point range for Chisholm. Gaddy added another Alva basket, and Adair made one of two shots from the charity stripe to finish out the quarter. Alva now led 29-14.

Watkins came off the Chisholm bench and led off the final period with a basket. The Ladybugs added seven unanswered points on a basket from Gaddy, another two points from Argo and a signature Argo three-pointer. The Ladybug lead was now 36-16. Watkins was determined to catch up, sinking back-to-back three-pointers. When the Alva girls seemed about to score, the Lady Longhorns stopped them with a foul. It didn't help as both Argo and Gaddy made their two points at the charity stripe while Lane fouled out of the game. At the final buzzer, Alva won 40-22.

The Alva Ladybugs now have record of 11-3. They will travel to Newkirk for a 6:30 p.m. game on Tuesday before beginning play in the Pawhuska Invitational Tournament on Thursday. The Alva girls take on Tulsa CHEF at 4 p.m.

Gaddy led the Ladybugs in scoring with 14 points followed by ten from Argo. Ohm had eight points, Kelln seven and Adair one.

For the Lady Longhorns, Watkins led with 13 points. Vogt had four, Peeper three and Fuksa two. 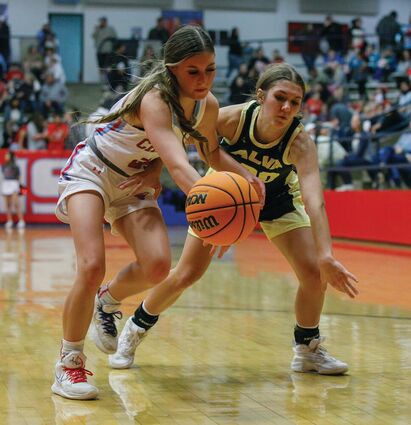 Ladybug Lakin Gaddy (00) tries to beat the Lady Longhorn player to the ball before it goes out of bounds.

In Friday's report on Thursday night games against OBA, it was stated the Ladybugs won 33-30. Actually the Ladybugs were edged by the Lady Trojans 33-30.

The Alva girls led 11-6 in the first quarter and went into the halftime break with an 18-13 margin. However, the Ladybugs were held scoreless in the third as OBA put 12 points on the board to lead 25-18. In the final period, the Ladybugs outscored OBA 12-8, but it wasn't enough, and OBA won 33-30.

Leading the Alva scoring were Gaddy and Kelln with nine points each followed by Argo with eight while Adair added four.

OBA's high score came from Conley Cayot with eight followed by seven from Clara Caldwell and six from Brianna Colby. Lilyan Walden and Rian Titus each had four. Karson Jenkins and Kami Jenkins had two points each.