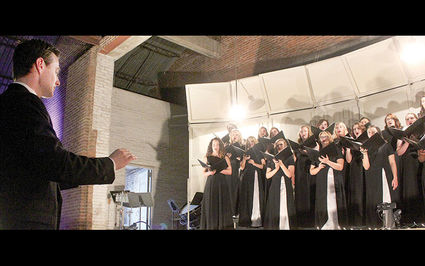 Northwestern choir members entertain the audience in the Alva Independent School armory during their spring 2016 Soundscapes concert. Soundscapes II will take place Thursday, April 27, at 7 p.m. in the same location.

Northwestern Oklahoma State University's choirs, which consist of the University Singers and the University Chorale, will perform "Soundscapes II" at 7 p.m. Thursday, April 27, at the Alva Independent School armory, 230 Choctaw.

This is the second year the choirs have chosen this unique location for a concert.

Karsten Longhurst, director of choral studies, is looking forward to this one-of-a-kind concert experience through using the venue's built-in stage and sharing the unique sounds of the choir members' voices that are generated in the space.

The choirs will be performing a variety of so...