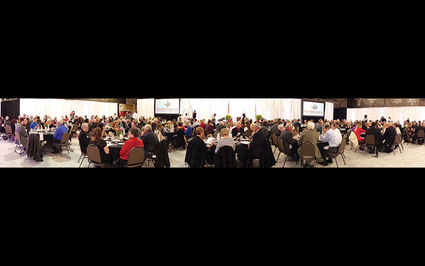 A crowd of about 300 gathered for the annual Spring Alumni Reunion Saturday evening, April 29, with a banquet inside Perceful Fieldhouse. The attendees heard speechs from several outstanding graduates of past years, but also was told of NWOSU's first-ever Capital Campaign by President Janet Cunningham.

ALVA – Northwestern Oklahoma State University announced an ambitious $28 million comprehensive campaign on Saturday, April 29, renewing its commitment to students and faculty, and a continued promise to the state of Oklahoma.

At its annual Spring Alumni Reunion, Northwestern also announced it has raised nearly $24 million to date in support of the Imagine Northwestern campaign, the first comprehensive campaign in the university's history.

"One hundred and 20 years ago, the pioneers that settled northwest Oklahoma imagined a school that would serve as the cornerstone for education and oppo...