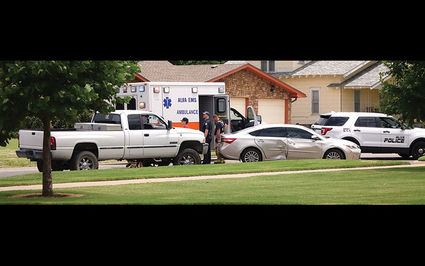 The white Dodge pickup struck the gold Toyota when it turned in front of the pickup on College Avenue. Lane Beeson of Shattuck said he thought the street was four lanes instead of two and started to pass the slowing car on the right.

Some confusion about the number of lanes on an Alva street led to a two-vehicle collision on Sunday, June 18. The wreck occurred at 2:09 p.m. on College Avenue south of Locust Street.

Bellah attempted to make a right turn to the west into a private drive when his car was struck on the passenger side, causing damage to the front and rear passenger side doors.