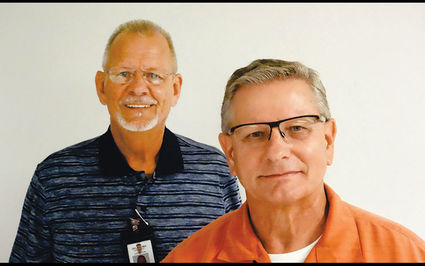 Michael Culbreath, chaplain at the Bill Johnson Correctional Center (BJCC), is working with Victory Bible College to bring more faith-based lessons and courses to offenders at the prison. The Tulsa-based college previously presented courses at BJCC back in 2007-08. At that time, they were known as Victory Bible Institute. In fact, they won Volunteer Group of the Year at the annual volunteer appreciation dinner that year.

A representative of the Bible college visited in Alva Monday to make arrangements with the BJCC chaplain to begin courses as soon as practical.

"The courses are all taught using DVD video, supported by appropriate printed material," said Victory's Steve Young. "There is no charge to the students within the prison. However, the same courses are also taught at the Victory Bible College in Tulsa for a fee of $3200 for the first year."

Young said there are 34 separate course titles that total 68 credit hours if all are completed. Some of the titles are "Authority of the Believer 1," "Principles of Ministry," "Divine Healing," "Character of God" and "Laws of Leadership."

The courses are not accredited by the State of Oklahoma, but are accepted as college credit at several faith-based colleges in the Tulsa and Oklahoma City area such as Oklahoma Wesleyan University, Oral Roberts University, Southwest Christian University and Randall University. Young said several former inmates have completed their college degrees in ministry after having begun the courses while incarcerated.

Since prison sentences are growing shorter at BJCC, including some for as little as six months, the students would not have the opportunity to complete all the courses before being released. There are some half-way houses and re-entry programs outside of BJCC where the tuition remains free. However, if the student is released from those DOC services, then they will need to pay tuition at one of the colleges.

Young said the Victory Bible College has 109 programs in 64 facilities including federal, state, private and county institutions throughout the nation. Also, the group has approximately 50 programs in foreign countries.

BJCC Chaplain Culbreath is retiring in about three months. He said two or three inmates have expressed interest in participating in the courses and he hopes to have the program launched as soon as possible.