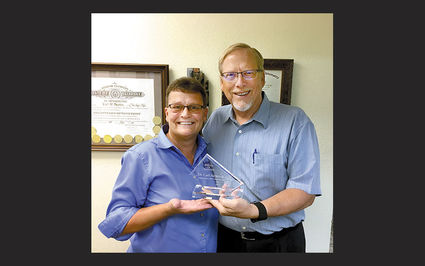 Three area citizens have been named Friends of Guidance by the Guidance Division of the Oklahoma Association of Career and Technology Education (OKACTE). The awards were announced recently at OKACTE Summer Conference held in Oklahoma City. Those honored include Todd Holder of Alva, Sally Eggleston of Waynoka and Dr. Carl Newton of Cherokee. Karen Koehn made the nomination of all three individuals. 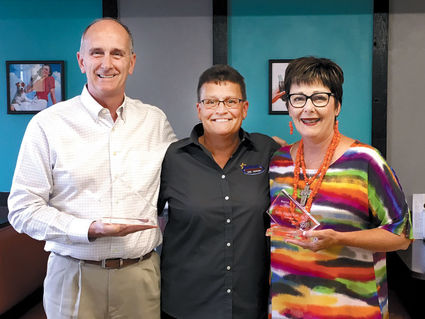 Todd Holder and Sally Eggleston are presented with the Friends of Guidance award by Karen Koehn, career counselor at Northwest Technology Center.

According to Koehn, "Todd has provided assistance for the NWTC Sixth Grade Career Fair for the past 20 years. He continues to support and provide dedication and support to all of the activities at Northwest Technology Center.

"Sally spent her life working in education. Since her retirement, she still assists in preparing students for contest and also serves on the NTWC Foundation Board of Trustees.

"Dr. Newton served on NWTC's school board for four years and also represents our area as a member of the Oklahoma House of Representatives. They were all deserving and it is our pleasure to spotlight their passion and commitment to Northwest Technology Center."