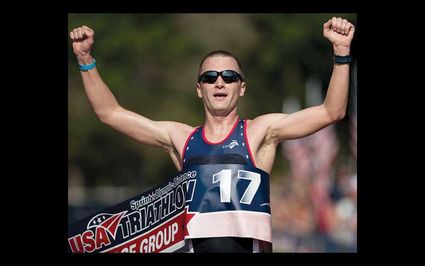 AHS 2000 graduate Ryan Bickerstaff breaks the banner as he is first to cross the finish line in his age division in the USA National Triathlon in Omaha.

Ryan and Sarah Bickerstaff grew up in Alva, and were known as the kids who excelled in many things, especially in the Iron Kids Triathlon competitions. Their parents are Alva CPA Henry and Harriett Bickerstaff, who took their son and daughter to around 50 of those triathlon competitions sponsored by Rainbo Bread.

Fast forward many years to August 2017. Ryan, a 2000 Alva High School graduate, ran on the track team at Stanford University and resides in Palo Alto, California, with his wife Jen. He is a staff software engineer with Intuit where Jen is a group product manager.