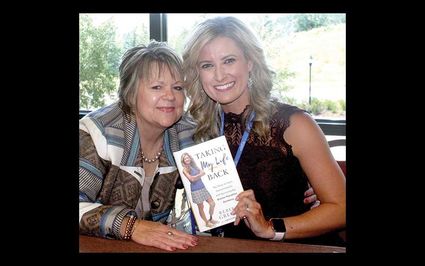 Boston Marathon bombing survivor Rebekah Gregory was a guest speaker at the Steamboat Institute Freedom Conference. She signed copies of her book, "Taking My Life Back: My Story of Faith, Determination, and Surviving the Boston Marathon Bombing." She signed a copy of her book for Newsgram reporter Yvonne Miller who attended the conference.

(Editor's Note: Jennifer Schubert-Akin is a 1975 graduate of Burlington High School. She is co-founder and CEO of the Steamboat Institute in Colorado. At the recent SI Freedom Conference, Rebekah Gregory was the closing luncheon speaker. She told of her experience of being blown up yet surviving one of the blasts at the Boston Marathon bombing. Readers may remember reading that Schubert-Akin crossed the finish line that year about five minutes before the bombs exploded. She's now run the Boston Marathon 23 consecutive times. Schubert-Akin invited Gregory to speak. A true survivor, Gregory is a beautiful young woman who told her story with such grace and had the crowd so inspired and moved to the point when it was time for questions and answers no one could even speak without emotion.)

At the request of the FBI, Rebekah Gregory, who lost her leg in the Boston Marathon bombing, gave a victim/impact statement at the trial of the youngest brother who set off the bombs.

"I looked the bomber in the eye. He never once looked at me. I wanted him to know not what he had taken from me, but everything he had given me. I'm still walking," Gregory said.

"I stood up to give my victim/impact statement. In order to give a victim/impact statement, I would have to be someone's victim," she said in the courtroom. Looking at the terrorist, Gregory told him, "I'm definitely not your victim and definitely not your brother's." She also told the defiant brother who reportedly continued to praise Allah in his statement, "No one will remember you or your brother's name. The good will always prevail."

Gregory Tells Her Story of That `Horrific Day'

It was April 15, 2013. "When two brothers brought two bombs" to the Boston Marathon, "my life got really hard," Gregory said.

This was her first time in Boston. A group of Texans had traveled together there on her 26th birthday weekend. She had gone to watch her boyfriend's mother compete in the race. The group of friends were packed and ready to fly home right after the marathon.

She described the beautiful day and said, "We were so happy!"

"We were in an awesome spot, right in the middle of the action."

The group had been at the 17 mile mark, but made their way through the crowd to the finish line to see their runner cross it.

Gregory said most people assumed she was running the Boston Marathon. "No, no, no. I was standing there eating chocolate-covered pretzels, wondering why anyone would run 26 miles for fun."

As beautiful as the yellow rose of Texas, Gregory had the crowd laughing as she injected a touch of humor into her account of that day and her life thereafter, besides bringing them to tears as she revealed details of her story.

Gregory had taken her 5-year-old son, Noah, to the marathon. She said he was excited to be there at first, but by the time they had reached the finish line, "He was done." Noah was bored and tugging at his mother's clothes, as you might imagine. She told him to sit down against her legs and feet and play in the imaginary rocks, although the sidewalk was concrete. She felt he would be safe there as she didn't want to lose Noah in the massive crowd.

"Three feet behind us was a bomb in a backpack," she said. The blast left her body filled with shrapnel.

Contrary to what happens to many severely injured people, Gregory said, "I did not lose consciousness. I remember every single moment of that horrific day.

"I couldn't lift anything but my head, I could see blood, BBs and ball bearings everywhere – and body parts that weren't even attached to people anymore.

"I remember trying to look at my own legs. All I saw was blood and my left leg was on fire. I could see my bones next to me.

"I was pretty sure I was going to take my last breath. All I cared about was where my little boy was."

Suddenly she found herself "in a war scene," and in the middle of a terrorist attack.

She spoke of being able to hear nothing except loud ringing in her head. As she would later learn, both her ear drums were blown out in the blast. Yet, "All of the sudden I heard, Mommy, Mommy, Mommy." She was able to see Noah lying behind her.

"I tried to reach my left hand out to Noah. That's when I saw all the bones in my hand were sticking out and blood was dripping down my arm."

"That was the moment in time I thought I was sure going to die. I laid back and said, `Lord, if this is it, take me, but please let Noah be okay."

Gregory saw that a first responder had picked Noah up, "And I saw a gash in his leg and a little blood. He was sitting up and I knew he was going to be okay. He was my miracle," she said with a smile to which the audience responded with applause. She realized her legs and body hit by the bomb parts had spared her little boy further injury.

"I will never allow myself to feel sorry for anything that's happened to me in my past," Gregory said. She said Noah is celebrating his 10th birthday. "Life is good – really, really good." She said every time Noah walks into a room with his big smile, she is reminded that, "Our blessings outweigh our troubles."

Enduring Over 65 Surgeries and Making a Life Decision

A week after the bombing, Gregory awoke from a medically induced coma in a Boston hospital. The first person she saw was her mother. With tubes down her throat it was hard to communicate. When her mother gave her a piece of paper, Gregory wrote, "God's not finished with me yet. There were angels all around us."

For the next 18 months, Gregory endured at least 65 surgeries. Many of those were every other day to remove shrapnel. She still has some of those foreign objects in her body today. She said doctors tried all that time to save her left leg.

She showed pictures of herself with a cage-like contraption that held pins in an attempt to keep her leg below the knee together.

"Those pins burrow through your bones. It's the worst pain you'll ever experience."

"To be honest, I looked like a shark's leftover lunch," Gregory said. After heart-to-heart conversations with doctor and family, she made the decision to have her left leg removed.

"My leg is not my life," Gregory said. "My decision was to cut out the one thing that was holding me back – and that was my left leg." She again brought laughs to the crowd as she equated her damaged leg to a "bad boyfriend" and wrote on the leg, "It's not you, it's me."

After the amputation in November 2014, Gregory said, "I wasn't sad. I had such peace. I was taking back what those brothers tried to take from me."

In 2015, she married her college sweetheart Chris. After her life-threatening injuries she was told she would never have more children. Well, after few months of marriage they found out she was pregnant. Their little girl came too early and Chris was told he might lose both his wife and baby. But the happy ending is they have a have a healthy baby girl who is now 15 months old.

Before the bombing, Gregory said she was "working my life away" in marketing at a corporate firm. 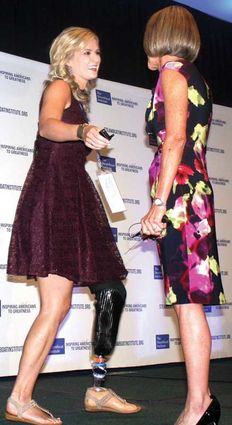 The audience at the recent Steamboat Institute Freedom Conference fell in love with Rebekah Gregory, who eventually lost her leg after being blown up in the Boston Marathon bombing. She told about her story of survival and the fate of her 5-year-old son who was with her that day. SI co-founder and CEO Jennifer Schubert-Akin welcomed the heroic and inspiring young woman onstage. Schubert-Akin is a 1975 graduate of Burlington (Oklahoma) High School.

She laughed as she told about naming her prosthetic leg she named Felicia. She decorates the ankle with jewelry and gets a pedicure every two weeks just like her healthy toes do. For Halloween she's gone as a shark attack victim, Captain Hook – you get the picture.

"Life is so hard. We are going to laugh. If we don't laugh it will kill us," Gregory said of her family. She admitted the challenges, "how hard it is to get out of bed," but said, "I embrace and accept." She said, "It's better than stressing about something I can't control."

Her prosthetic leg "does not define me," she said. "It gives me a platform. (...) I try to inspire and encourage."

With her new prosthetic leg in place, that chocolate-pretzel-eating young woman was determined to run the Boston Marathon. In training she had run 16 miles but had some trouble with her leg. She settled to run the last 3.2 miles.

"If you mentally think you can do something, you can," she said.

When finishing the race she saw all the ribbons "where I was blown up and people died." She now knows the others injured and families of those who died in the bombing. It was an extremely emotional moment for her.

"The miles didn't matter – it was getting to the finish line," Gregory said. "It was taking my life back."