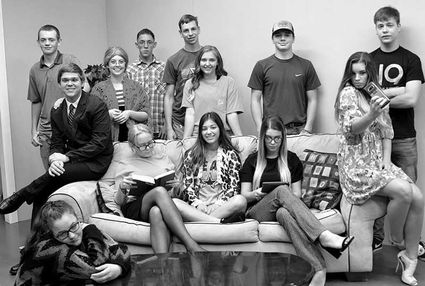 The Burlington school play this year was "Penny for Your Thought," a comedy/drama act written by Scott Haan. The main idea of this play is that Penny (played by Caitlin Flackman) is having trouble with her boyfriend Matthew Lane (played by Brenner Clark). Someone new has caught the attention of Penny by the name of Rick Winters (played by Gavin McCullough). The different egos (Jaden Allen, Deacon Burleson, Abi Trujillo, Jazmine Vest and Sadie Crusinbery) are the voices in Penny's head that influence her decisions showing what it is like inside of her head. The play was held the afternoon of Sept. 25 for the student body and another performance was held at 7 p.m. for the community and families. The play was directed by Burlington music teacher Isi Ofiu.