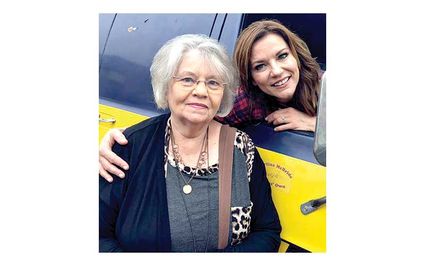 While visiting her hometown area for the Medicine Lodge Peace Treaty, country music legend Martina McBride hugs an old friend Vonda Landwehr, who is the mother of some of Martina's old friends.

When country music legend Martina McBride returns home to Sharon, Kansas, it's very low key. When she was spotted at the Medicine Lodge Peace Treaty, the following sweet moment happened as written by Alisa Boyce on her Facebook page. She granted permission to the Newsgram to run it. 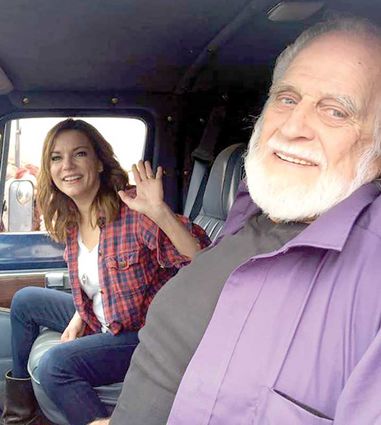 Martina McBride and her dad Daryl Schiff of Sharon drive her Wrangler van she won in high school around Medicine Lodge during the Peace Treaty Weekend.

Boyce wrote, "When everyone else sees Martina McBride pull up in a 1980's Wrangler van with her dad, they see a country music superstar. What we see is that, but we also see Martina Schiff from tiny Sharon, Kansas, in the Wrangler van that we remember her winning in high school and seeing that same van cruise around Sharon with her and her high school friends in it, including my older brothers. We see the girl that we grew up watching sing at school music programs, graduations, and of course at every local wedding dance with her family's band the Schiffters! My mom wanted to go say hello so badly, but was hesitant because Martina was so bombarded with fans and she didn't want to bother her. After some coaxing, I helped her find her way into that big line and it was the sweetest example of what being from a small hometown is really all about: genuine and forever love and bonds!"