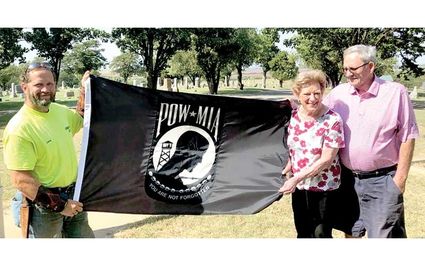 A new POW and MIA flag was recently presented to the Alva Municipal Cemetery in memory of Major Albury Eugene Stowers Jr. and all POW (Prisoner of War), MIA (Missing in Action) and KIA (Killed in Action) military service members who are still missing or not accounted for. Major Stowers was shot down along with Major Peter Hesford while they were on a mission over Laos during the Vietnam War. From left: Alva Municipal Cemetery Sexton Chris Greve, Cecie Dunkin, Rod Dunkin.