'We need English for everything' 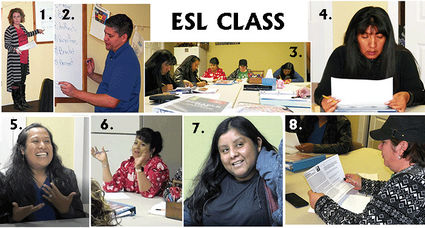 1. Speech pathologist Konya Martin gives a lesson on words commonly used in education. 2. Louis Garcia lists the day's spelling and reading comprehension words on the white board as his ESL students copy them down into their notebooks. Later in the class the words would reappear in readings and discussions. 3. The ESL students take a reading comprehension quiz. 4. Letitia Miguel slowly reads aloud, carefully pronouncing each word. 5. Emma Gomez laughs as she describes some of the everyday difficulties that come with not speaking English well. "The fast food -- I ask for french fries and they always give me a Sprite!" she says. 6. Erica Rios, who works at Beadles, says learning English is important for her work, because she needs to be able to communicate with her boss, coworkers and residents. 7. Francisca Cruz smiles even though she's talking about how much she misses her home in Mexico. 8. Nena Rios reads aloud a lesson about Benjamin Franklin.

Leticia Miguel has a sick child she takes to Oklahoma City for cardiac care; it's vital she be able to communicate clearly with her child's doctors.

Erica Rios, who works at Beadles, wants to be able to communicate better at work.

Francisca Cruz, who worked with computers in Mexico, hopes to get a similar job in this country.

Emma Gomez wants to get her GED.

The reasons may be different, but these five intrepid women come together each week in the basement of Alva Wesleyan Church to learn English. That one skill could open doors that remain stubbornly closed to those who don't speak it.

Louis Garcia, the church's assistant minister over Spanish ministries, has been teaching English as a Second Language (ESL) classes for about four years, he said, and has taught about 21 students in that time.

"We started with three students and just keep growing and finding new teachers to help us learn more," he said.

Learning English as a Second Language: No Small Feat

Using a curriculum Garcia found online, the class began with a long list of vocabulary words. These included math terms, words that sound similar to each other, words they can use next time they go to the store: half, minus, plus, percent, really, totally, finally, usher, gusher, crusher. The students wrote the words down, careful to spell each correctly. Then, going around the table, they used each word in a sentence.

"Minus," said Nena Rios. "I need minus work." The class burst into laughter, as did Garcia. "Less work. You need less work," he said. Judging by the reactions of the other students, they all need less work.

Konya Martin, a speech pathologist, helps Garcia teach the class. This time she taught a lesson on words used in education: primary, secondary, trade, career. She wrote the words on the whiteboard, explained it as she did and used it in context.

They work well together, Garcia and Martin. Garcia, a third-generation American born in Colorado to Spanish-speaking parents, speaks Spanish very fluently. His wife is from Mexico, as well – in fact, he and his family celebrated Christmas in Mexico this year.

Martin, on the other hand, is an English speaker with a bare smattering of Spanish.

Martin passed out a one-page history lesson on the development of public education in the U.S. In that lesson were many of the words they had been studying during the first part of class. Going around the table, the students read the lesson aloud, and then answered several reading comprehension questions.

"Really," said Francisca Cruz, reading out a vocabulary word before using it in a sentence. "I really am very sad."

They all miss where they're from, of course. Homesickness, missing loved ones still back there – it's just an inevitable part of moving to a new country. It's a sadness some, like Cruz perhaps, live with every day.

Emma Gomez hesitates to tell a visitor to the class where she's from because she doesn't think the visitor will have heard of her hometown: Veracruz, Mexico. But the visitor has actually been to Veracruz, a gorgeous and historic coastal city of half a million people that was founded in the 1600s. Gomez is surprised and delighted, and next to her Leticia Miguel smiles gently and pats her on the shoulder. Homesickness must be even more painful when, in your new world, you rarely meet a soul who's heard of the world you grew up in.

"Veracruz is a beautiful place," Gomez said, her heart in her eyes, a world of emotion behind the simple words.

But Gomez has been in Alva for 10 years, and she is making progress here.

"The troubles that I had before! The fast food – I want to get french fries and they always give me a Sprite!" she said, laughing. "I was always kind of sad! Where's my fries?" and she laughed again. "Because they didn't understand what I was saying. But I try again! And again and again. And I think I'm getting better." She's getting fries more often than Sprite now, she said.

"At work, too, they didn't understand," she said. "But they've been patient, all the people that I've met. So I have to learn (English) so that way it will be more easy for me and easy for them."

Gomez began working at Vantage Plane Plastics four months ago; before that she worked at Value Added Products. "And before that I clean houses," she said, "and even for cleaning houses you have to speak English" to understand what the employer wants. "So we need English for everything."

Cruz has been here two years. "It's very different here," she said. In Mexico, she studied computers, but because she doesn't know English she can't use her skills here until she learns the language.

It's frustrating, she said, because there are many more opportunities here than in Mexico, but she can't take advantage of them yet.

The only thing she has to complain about, though, she said, is the food. Again, the class erupted in laughter and agreement.

Diversity and Prejudice in Alva

If she were of a mind to, Cruz could likely find more to complain about. Some of the students said that sometimes when people discover that they don't speak English fluently, they think less of them.

Nena Rios came to Alva 12 years ago and works at Alva's Market. She said there have been times when she's asked for help, but when they heard her Spanish accent they'd just say, "I don't understand what you're saying to me" and blow her off without really trying to understand. "Just some people," she said. Teachers and some others, like her insurance broker, try very hard to understand and help her, she said.

But things have improved, she said. "Twelve years ago there weren't many Hispanic people here," she said.

Garcia estimates 10 to 15 Hispanic families live in Alva. "The remaining Hispanics that you see in our town mainly work the oil fields and are only here Monday through Friday and then go back to their homes on the weekends," he said.

"Alva is blessed with a kind and loving Hispanic community," said Garcia. "They love and support Alva just like anyone else who lives here. Many of the Hispanics who live here have a desire to be able to speak English and to connect with more people in the community. They have felt the love from people here in Alva as they try their best to practice their English they are learning."

The Hispanic families do often get together to celebrate special events, said Garcia. "When we get together we have a good time," said Garcia, who noted that he'd had to find four long tables at the last gathering so that everyone would have a place to sit and eat.

"From my personal experience, I have found Alva to be a loving community who try their best to find ways to bridge the communication barrier between English and Spanish speakers. I hear many testimonies how Alva has been such a welcoming community.

"Out of the five years that I have lived here, there has been only one instance that I felt unwelcome. I was at Walmart with my wife and we were talking to someone from Puerto Rico in Spanish and getting to know her. Our group at that moment consisted of the Puerto Rican, my wife who is Mexican and myself who is third generation U.S. citizen. I guess by us speaking in Spanish, it had offended a person and a guy came to make a comment to us.

"Yet when this guy came to talk to us, he spoke to the Puerto Rican because she had lighter skin color than my wife and myself and her hair was colored red. Now the funny thing about that was although a U.S. citizen was in the group who was fluent in English, because the Puerto Rican looked more Anglo American, he spoke to her. Yet after that moment, we have only felt love from Alva and welcomed wherever we go."

Other nations are also represented in Alva. "We have seen many different nationalities come through Alva – people from Nepal, Mexico, Puerto Rico, Guatemala, Honduras, Venezuela, China and Russia," Garcia said. He attempts to teach anyone who needs to learn English.

Basic English is taught on Tuesdays and Thursdays (with Micheela Sterling from Washington Early Education); Advanced English (with Garcia and Martin) is on Mondays and Wednesdays.

He's also in need of people who can teach English.

"I'm always looking for people who have a heart to teach English," Garcia said. "If we could get more volunteers then we could even try to do some one-on-one classes so people can advance even quicker."