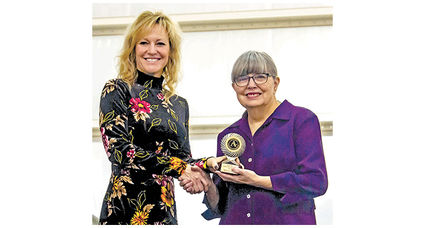 Marione Martin was presented with the Lifetime Achievement Award at the 5th Annual Citizens Choice Awards Gala Feb. 10 in Alva.

Martin grew up in Missouri where her parents owned a weekly newspaper. In 1963 she married Lynn Martin and worked for a printing company. She later worked at KTTR-AM, which was owned by Lynn's parents. During this time, she passed tests to obtain her first class radiotelephone license designating her as a broadcast engineer.

Jan. 1, 1969, the Martins bought KALV-AM in Alva. The Newsgram was started in about 1971. Lynn also continued his photography business in Alv...