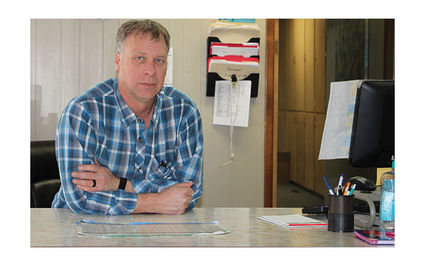 Ernie Theilen, general manager of O.K. Co-Op in Kiowa, says he has an open-door policy and invites anyone and everyone to come say hello.

The O.K. Co-Op in Kiowa changed management in late January, taking on Ernie Theilen as the general manager.

Theilen comes from a background heavily peppered with agricultural experience, dating back to May of '90 when he started full-time in the elevator business.

Back then, he had graduated from Oklahoma State University, majoring in agricultural economics with what he calls an "international marketing flair." Having worked in almost every position from the boot pit up, Theilen has spent most of his working career serving in different capacities at co-ops in Oklahoma, and put in a good stint in at ADM Grain in Pratt and Hugoton.

He's served on several boards like the Environmental Management for Agriculture, the Oklahoma Agribusiness Retailers Association and the advisory board for the Oklahoma Co-Op Council. He's currently a certified applicator but used to hold a Certified Crop Adviser certification as well. He understands the farming lifestyle and when it comes to farmers, Theilen said he likes to help gain profits.

"I just enjoy helping producers make money ... helping them succeed. If we can help them succeed, that helps us succeed. It's a partnership," he said.

He's also acknowledged the advances in technology and the role it plays in the industry now. Admitting it is sometimes hard to embrace technology, he recognizes its ability to dramatically increase efficiency and accuracy. 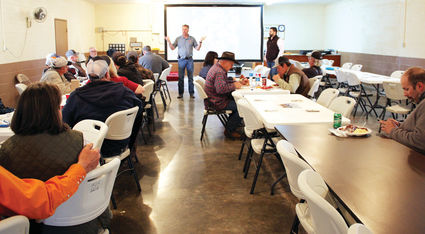 O.K. Co-Op's Ernie Theilen greets attendees at the producers meeting with Comark Equity Alliance (CEA) last week in Kiowa. About 30 people showed up to talk about contracts, futures, and risk reduction in grain marketing, all while enjoying a BBQ brisket lunch.

"Keeping up with technology is going to be very important for us. It takes a lot of marketing for grain now because the market is moving so much, and that's such an important part," he said. "It all comes back to marketing."

Theilen said his favorite part of the job is talking because he likes personal interaction. He's looking forward to getting to know everyone and not just customers but townspeople too, he said.

For those that don't know him yet, Theilen is a family man; he and his wife of 30 years share two children – a daughter who will be a college sophomore next year, and a son who lives in Stillwater with his wife. He's also a devoted Christian with deep faith. For four years, he worked with a non-profit at his church in Pratt to raise money for missionary work to fight human trafficking in India, South Africa, and Mexico.

If you want to know more, Theilen extends his open-door policy to anyone who wants to come to say hello.