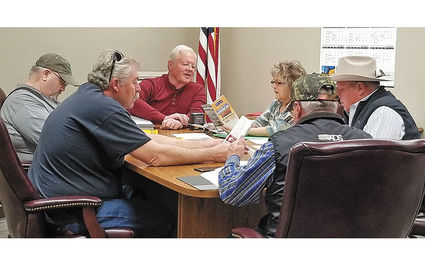 Monday morning the Woods County commissioners listened to a request for a small car show to be held in the courthouse parking lot. Norville Ritter of R.A.C.E. said the group wants to expand their Crazy Cool Boulevard Cruise, planned for July 18, to include a car show downtown in Alva for about three hours. The event is held in conjunction with the merchants' Crazy Days sales. They want to avoid taking up the street parking so want to hold the show in the paved parking area and possibly on the grass provided it's not wet. The commissioners approved the request.

The commissioners also approved the use of the courthouse lawn for the annual Alva Fire Department Easter Egg Hunt.

Jennifer Schafer opened the one bid received for two Landpride rotary mowers from District 3. Commissioner John Smiley thought the bids by Roger Mantz were low and wondered about selling just one of the mowers. The commissioners tabled the bid so the district attorney may be consulted on whether the bid terminology allows that.

CED #8 Engineer Donnie Head went over the bridge inspection invoice and report. He said all 144 bridges were inspected with some minor repairs being done. The commissioners approved the invoice and report. Head said there is no cost to the county as 80 percent is paid by federal funds and 20 percent by the state.

A change to the Circuit Engineering District (CED) Auction policies was approved. Some entities have taken items to the auction and then bought them back without paying the auction percentage fee to CED. This policy states that the fee will be charged even when items are bought back.

The commissioners voted to upgrade employee dental coverage by OPEH&W from standard to enhanced. The change makes no difference in the cost while increasing services.