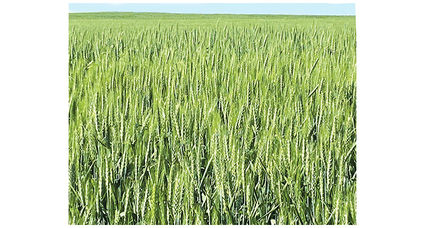 In early May the green wheat is about to fill and appears to have potential to be a good crop.

Drive down the highway in northwest Oklahoma and south central Kansas and you'll see fields of pretty green wheat blowing in the wind with potential to be a good crop. Now if Mother Nature will cooperate, 2020 could see at least an average- or above-average-yielding crop. The country is due some good news after the COVID-19 nightmare that is still ongoing. A few area elevator operators commented about the fields in their area.

Charlotte Murrow is the general manager of Alva's Farmer's Cooperative since Ronnie Truelock's retirement at the first of the year. Sales manager Matt Campbell gave an update on the crop to the Newsgram.

"It's pretty good overall," Campbell said of the crop. "It going to be pretty average." He said the average bushels per acre is 32. "But there will be some 50-bushel-per-acre wheat out there," he said. "The crop is in pretty good shape. There's no rust."

When asked what stage the wheat is in, Campbell explained that it's starting to get a little tiny yellow flower that will become a berry about a week after flowering. He said the berries will be filling the head in the next three to four weeks. Campbell estimates harvest will be going between June 10 and 15.

Burlington Co-op office staff spokesperson Meredith Harden said the wheat crop in the Burlington area "is looking good. We were fortunate to miss the freeze." She said a few people have sprayed a fungicide.

"We're getting dry and need rain in the next few weeks. As long as we can stay away from hail we're in good shape!"

Harden predicts that "Harvest will be on time, around the second week of June, weather providing."

Dacoma Co-op Manager Jake Kelln said wheat in the Dacoma area south of Alva "is looking pretty good – not quite as good as last year." Why? "Because April had less rain – was dry when the head was trying to fill and head out."

Kelln said, "There was no significant freeze damage. Lots of guys are out spraying fungicide because of insect pressure. We have lots of aphids, brown spider mites and tan-spot (a fungus).

"We have a good crop coming," Kelln said. He predicts harvest to be "a touch on the early side." He expects test samples to be taken around late May, "a little ahead of schedule."

North of the State Line

"I think the (wheat) crop looks a little above average – pretty good," Theilen said. He's not aware of any freeze damage and said some farmers are spraying with a fungicide. "But at this point I've not heard of an overabundance of any disease or insect pressure." He added, "For now we've had adequate moisture but will need more."

Not being in this area for previous wheat harvests, Theilen said if weather cooperates, he expects harvest will come at the average time – around the second week of June.