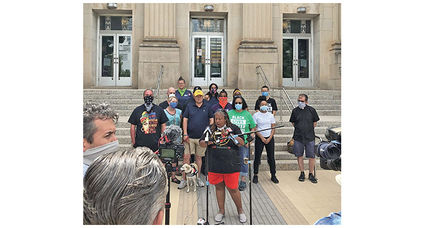 Rev. T. Sheri Dickerson, the executive director of Black Lives Matter OKC, holds a press conference Monday outside the Oklahoma City Municipal Building to go over the group's demands. Among the demands is to create an independent review board for complaints about officers, including ones alleging racial profiling.

As protests over racial policing practices continue to rage across Oklahoma and the nation, a milestone in Oklahoma's racial history will quietly pass later this week.

Friday, June 5, will mark the 20th anniversary of the passage of a state law that for the first time explicitly banned racial profiling by law enforcement agencies. The law made it a misdemeanor crime for officers to stop, detain or arrest someone based on their race or ethnicity.

Shortly after the bill was signed into law in June 2000, Maxine Horner, a state senator at the time who authored the legislation, called it "long o...