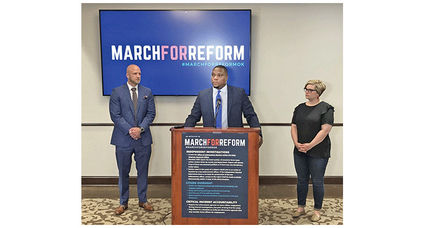 State Rep. Monroe Nichols, D-Tulsa, holds a press conference Wednesday, June 10, at the State Capitol to unveil the framework for policing-oversight legislation that he and other House Democrats want to see during the next legislative session. Rep. Collin Walke (left) and House Minority Leader Emily Virgin, D-Norman, joined Nichols at the event. Several of the proposals seek to revive legislative efforts that were not taken up in past sessions.

Months before the Memorial Day death of George Floyd and the weeks of nationwide protests that followed, Oklahoma's Legislature had a chance to take up issues that today dominate the headlines.

Lawmakers introduced a set of bills at the start of the year that would curb the use of excessive force by police, broaden the use of body cameras, require lawmakers to consider the impact of new laws, create an Oklahoma Commission on Race and Equality and set up a policing standards task force.

All bills failed to pass.

Only one received a floor vote. Most didn't even get a committee hearing –...