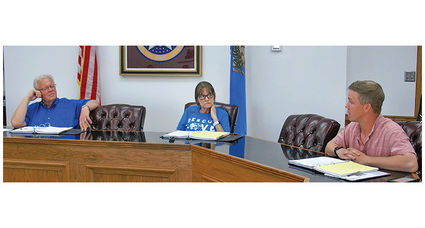 Alva City Councilmember Connor Martin (right) explains why the tourism tax budget was reduced from what the committee approved in May. From left are Tourism Tax Chair Norville Ritter, committee member Terri Parsons and Martin.

Wednesday the Alva Tourism Tax Committee approved two requests for funding, discussed their budget proposal vs. what was approved, and changed the deadline for tourism tax applications.

Because the tourism committee has voted to support the Alva Arena for $150,000, committee members thought the budget should be higher. Brady said if that need arose, the committee could go back to the city council and request a budget amendment. Apparently, the committee did not agree and voted to set the budget at $330,000. Connor Martin cast the only dissenting vote.

"Ultimately we went back to the Finance Committee. We reviewed it and we just could not come up with anything else," said Martin. "It was recommended to council and they approved it." The Finance Committee is made up of council members Dr. Bo Hannaford, Brandon Sherman and Martin.

"We're asking the other committees to do the same thing," Martin said. "It sucks. I'm kind of conflicted being on both committees."

Regarding the money promised to the arena authority, Martin said if that did come up in this budget year and they had to go to the council to change the budget, "I don't see any reason why we couldn't access that or make it work. When it came to balancing the budget, we just had to do it. It's been no fun for anybody. I understand the frustration."

Ritter asked about the line of credit being pursued by the City of Alva. Martin said it was going slowly as the city had to come up with more information needed by the banks. It is proceeding carefully because no one has experience in how loaning to a municipality should be handled. The city is also working to put restrictions in place so the line of credit can't be "treated like a credit card" he said. "I think Angelica's done a great job tackling this head on. I have a lot of confidence in what she's doing and reporting," he added.

Martin said that Brady is also working on hotels that haven't paid tourism tax on time. She's looking at the procedure and trying to figure out how to take care of it.

Until the last minute, Tyson Kolb wasn't sure a Northwest Oklahoma Junior Rodeo Association event could be scheduled in Alva this month. He cancelled an earlier appearance at the tourism committee meeting because COVID-19 shut down the venues. When the Northwestern Rodeo facility north of Alva was closed, Kolb said he checked with the Woods County Fairgrounds which turned out to be closed also.

The outdoor arena at the Woods County Fairgrounds just became available so the rodeo was scheduled for this weekend, June 20-21. Kolb said the majority of those entering the two-day event stay in town for three days. He asked $6,000 from tourism tax to pay the stock charge for the event.

Ritter asked where the last event was held, and Kolb said Perryton, Texas. Following Alva, the association has scheduled events in Woodward, Enid, Woodward again and the final in Cherokee.

Since the event is to be held outdoors and rain is in the forecast, Ritter asked what they will do if it rains. Kolb said they will "keep on" as long as there is no lightning.

Terri Parsons made the motion to approve $6,000 for the event, seconded by Martin and passed unanimously.

Only three of the five committee members were present: Ritter, Parsons and Martin. Absent were Dr. Charles Tucker and Jaunita Dotson.

Brandon Long appeared on behalf of the Alva Golf and Country Club which is sponsoring the three-day Nescatunga Golf Tournament. The event is scheduled for July 10-12. Long said the tournament was expanded to three days with the addition of a closest to the pin contest on Friday. Many of the golfers come for a practice round that day anyway.

Forty teams or 160 players are expected for the tournament which has been going on for more than fifty years. Golfers are encouraged to bring their families so they can lounge around the swimming pool at the course.

Due to COVID-19 restrictions, the tournament will not include a meal so expenses are less. Long asked for $2,500 in tourism tax money to pay for extra labor. Generally the money is paid out when invoices are provided. In the case of the labor, receipts will be provided instead.

Ritter said he thinks it is important to have a golf tournament in Alva. He's aware of a lot of people who play golf and come to Alva to use the local course.

Martin made a motion to approve the $2,500 request, seconded by Parsons and passed unanimously.

In final action, the committee voted to change the deadline for applications to the first Wednesday of the month. The committee meets on the third Wednesday.

Ritter said the policy has required applications be turned in two weeks ahead of time, but that hasn't been enforced. The shorter lead time "makes it hard on Jodie (Bradford)," he said.