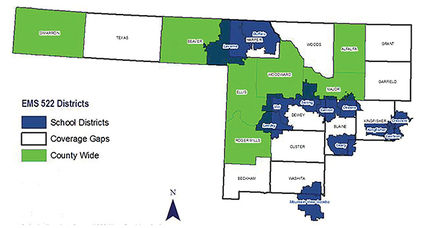 The proposed resolution would establish an emergency medical service district composed of all of Woods County for the purpose of providing ambulance services to all county residents. The amount of the levy is an ad valorem tax of three mills on the dollar of assessed value. Three mills is 0.003 times the assessed value or three dollars for every $1,000 of assessed value.

This tax levy would be allocated among the existing ambulance services. Currently the county has three services provided by the city governments of Alva, Freedom and Waynoka. These three services have divided the county into service areas so they can cover the entire county.

The commissioners will also vote on calling an election that would allow all registered voters in the county the opportunity to vote for or against this proposition.

If the measure is approved, a board of trustees of not less than five members will be appointed by the commissioners to oversee the ambulance services and the use of the funds from the district.

According to the Oklahoma State Department of Health, Woods County is surrounded by counties that already have 522 EMS districts. Countywide districts have been approved for Alfalfa, Major and Woodward counties. Harper County districts have been set up along school district boundaries so a portion of that county is not in a 522 district.

A 522 district for Woods County was considered a few years ago, but the ambulance services and cities involved could not agree that such a district was needed. Recently the Waynoka mayor approached the commissioners about the need for funds to keep their ambulance service operating. The City of Alva has also been considering options to improve the financial picture for their EMS services. Representatives of all three county services have been meeting to discuss the 522 district option.

The 522 reference comes from the number of the Oklahoma state question approved by voters in 1976. An ambulance district formed under this section may currently assess a tax on all real property within the district up to a maximum of three mills.