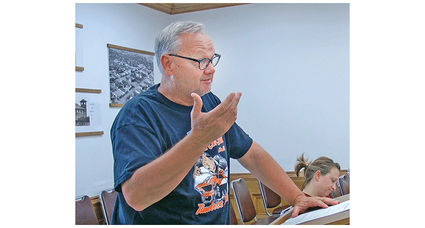 It's an event made for social distancing. Saturday night, everyone is invited to a relaxed outdoor evening hosted by R.A.C.E. (Racing and Cruising Enthusiasts) and the Alva Chamber of Commerce.

Most car shows, like the Big Cruise and Car Show in Alva, have been canceled due to concern about spreading the coronavirus. Building on the success of the July Crazy Cool Boulevard Cruise, R.A.C.E. members decided to plan two more cruises.

This Saturday from 8 to 10 p.m. vehicle enthusiasts are invited to join the cruise along Oklahoma Boulevard (U.S. Highway 64) in Alva. The public is invited to gather in parking areas along the boulevard to watch the fun. Bring lawn chairs if you prefer to sit outside your vehicle.

There will be two live bands along with Jerrad Bradt's deejay music. Food trucks will be scattered along the boulevard for refreshments.

At the Alva Tourism Tax Committee meeting Wednesday, Phillips asked for $7,150 in tourism tax collections to help with the August and September cruises. The money would be used to help pay for entertainment and advertising. Terri Parsons made a motion to approve those funds with Connor Martin seconding. The motion carried unanimously.

After approving minutes of the July meeting, committee members heard a report on finances from Chamber Executive Director Jodie Bradford. She said events that have been canceled have been removed from the list of encumbrances. After deducting other events not yet paid out, the report showed $455,541.39 available for funding tourism events.

City Business Manager Angelica Brady attended the meeting to report on her efforts to find out who is paying tourism taxes and who is not. She said she learned that Waynoka has the Oklahoma Tax Commission collecting tourism taxes for them instead of relying on the city for collections. She was given contact information so she can investigate that further.

After looking over the financial reports, Ritter asked why the pooled cash amount hasn't changed for several months despite interest from CDs and other revenue being added. He said it appears there should be about $32,000 more than what is listed. Brady said the formula must not be updating, and she'll check into it.

Parsons, who owns a local motel with her husband, said one hotel is showing a zero amount of tourism tax while another is too high. She believes the tax from both hotels was put under one hotel's account.

Due to the questions about the financial report, it was tabled until the next meeting.