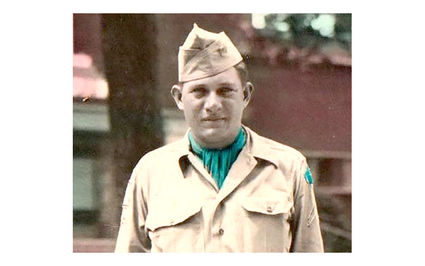 Eugene John Ferguson was born on Aug. 8, 1925, in Freedom. He grew up one mile north of U.S. Highway 64 and Highway 50 on the "Guthrie Ranch." He learned how to farm and ranch with some of the best the nation had to offer at the time. His parents taught Gene the hard work of dairy cattle, hogs, chickens and various other common ranch animals and how to make ends meet while providing for the family.

Gene was a U.S. Army veteran who served as a sergeant in World War II. Coming home, like most, he did not speak much about his time in the service other than peeling potatoes and long marches. When he returned home he was always present for legion events, meetings and assisting around the community where he was needed.

Gene enjoyed tinkering and creating little gadgets that sometimes were pretty useful. He relished spending his time on the farm helping to get everything in running order and calving heifers. He is proud of building many miles of fence that still stand in Woods County at the Eden Ranch.

Gene passed away January 7, 1994, and is buried at the Freedom Cemetery along with his wife, Joy Ferguson, and son, Johnny. Eugene and Joy had three children, Tana, Johnny and Troy Ferguson. Troy and Tana still play active roles within the Freedom community.

Thank you, Eugene John Ferguson, for your service and dedication to the country and community in which you spent your life.