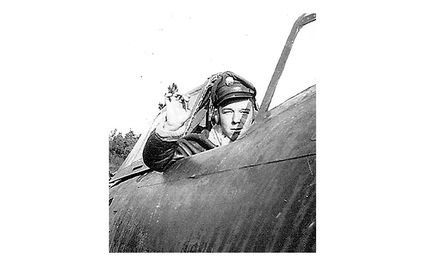 Wesley Willis Nixon was born just southwest of Freedom on Feb. 17, 1922. He started his banking career at the Freedom State Bank, working evenings and weekends as a janitor when he was only 15 years old, and he also collected gate at the local roller skating rink. After graduating high school in Freedom, Wes attended college in Alva, staying with the Freedom State Bank until he was called to duty for the United States Army in 1942.

Wes answered the call of his country, serving in the China-India-Burma Theater of World War II, first landing in Bombay, India, traveling by train across the vast jungles of India. Wesley told of sights of elephants, monkeys and tigers, and recalled the intense humidity and heat of the equator. As part of the Army Air Force's 9th Bombardment Squadron, Wes served as a crew chief overseeing the maintenance of Boeing B-17 ("Flying Fortress") and Consolidated B-24 ("Liberator") aircraft that had been converted to the India to China Airlift mission.

By the time the U.S. entered World War II, Japanese forces had invaded China, cutting off the supply roads to the landlocked Chinese army in eastern China. The Allied Forces sought to keep the 3 million-strong Chinese army supplied in their fight with Japan. Allies conducted an ongoing airlift mission to fly supplies from India up and over "the Hump"into China. The Hump, as it was referred, was a treacherous stretch of the Himalayan Mountains with wind gusts up to 150 mph and peaks as high as 20,000 feet. The forces also provided supplies and air support to build a 300-mile stretch of road to reconnect the Burma Road with China.

Wesley's job was to provide repairs and maintenance to these overworked planes that often ran 24 hours a day. Wes sometimes traveled with the planes in the cargo hold, unpressurized with cabin temperatures well below zero and often reaching altitudes where oxygen was thin. The Hump route earned the name "Aluminum Alley" as a result of the number of planes that went down in the treacherous flying conditions and terrain. Once, a plane on which Wes was riding made an emergency landing in afield. The crew took refuge in a Burmese mountain village for several days until conditions improved. When asked about the war, Wesley would simply say he was an airplane mechanic.

At the close of World War II in Asia, Wes recalled the joy of the end of the war, waiting on a beach in India as soldier transport ships came in and out. Once Stateside, he hitch-hiked back to Freedom. He recalled that in those days no vehicle ever passed a hitchhiker in uniform without offering a ride. Wes was honorably discharged on Nov. 8, 1945, at the rank of technical sergeant.

He returned to work at the Freedom State Bank and began dating a high school friend, Maxine Coles. After a two-year courtship, they were married. They made their home in Freedom. Wes was named president of the bank in 1956, a job in which he served until his death. Together, he and Maxine raised four kids, Kayle Costello Northcutt, Sue Reed, Mark Nixon and Julie Russell.

Always an active member of the community, he continually served on several boards and was a member of many area clubs. He held his membership with Freedom's American Legion Hatch-Vincent Post #63, and was also a member of the VFW. In 1972 Wes was instrumental in assisting with the refurbishing of the storefronts of Freedom's main street. He was a pillar in our community and a true town staple, helping businesses start and making sure to take care of those in town who needed his assistance. He always had kind words for everyone and often took his lunch breaks quietly eating at one of our local restaurants making sure to support local businesses. Wes and Maxine were known to take evening drives around town and truly enjoyed their time together.

An avid supporter of everything Freedom, Oklahoma, Wes missed only a few Freedom rodeos in his entire life. Aug. 23, 2013, Wes attended his final rodeo, making sure to sit in his usual spot where he could visit with everyone even though he wasn't feeling 100%, as he wouldn't have had it any other way. He attended the Old Cowhand Reunion that Saturday afternoon and even walked most of the way home after the event, having out-visited his ride home. His goodbye to our town was meaningful, fitting into a true Wes style of making sure everyone was spoken to and taken care of.

Thank you, Sir, for your service to our country and to our community.