Telling is not teaching 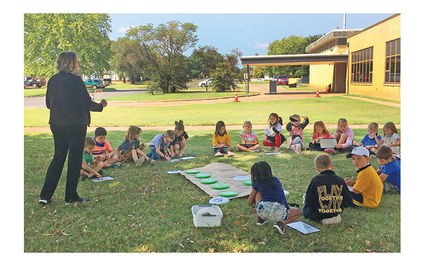 Teresa Rader (standing left) works with her first grade students on numbers at Washington Elementary. She created a large ten frame from a blanket and used frisbees to represent numbers.

Students sit captive in a classroom. At the front of the room, a man delivers a monologue disguised as a lesson, "In 1930, the Republican-controlled House of Representatives, in an effort to alleviate the effects of the ... Anyone? Anyone? ...the Great Depression, passed the... Anyone? Anyone? The tariff bill? The Hawley-Smoot Tariff Act? Which, anyone? Raised or lowered? ...raised tariffs, in an effort to collect more revenue for the federal government.

"Did it work? Anyone? Anyone know the effects? It did not work, and the United States sank deeper into the Great Depression." – Ben Stein, economics teacher from Ferris Bueller's Day Off.

Those of you growing up in the '80s and '90s will remember perhaps one of the greatest movies of all time, "Ferris Bueller's Day Off." That movie is full of memorable moments. Ben Stein deserved an Oscar for his portrayal of the most boring economics teachers ever experienced.

Everyone at some point can remember being in a classroom that resembled Ben's portrayal. Someone once said, "Telling is not teaching," but they forgot to tell Ben Stein. We don't tell students what we want them to learn and expect that learning to stick.

Teresa Rader, first grade teacher at Washington Elementary, knows this very well. It is a part of her everyday routine. It is how she approaches her job.

On a nice day recently, she moved her class outdoors for a math lessons about ten frames. A ten frame is a rectangle with ten equal spaces. It has five spaces on top and five on the bottom. You use counters or math manipulatives to represent numbers less than or equal to ten on the frame. Ten frames help kids develop number sense. Rader created a large ten frame on a blanket and used Frisbees to represent numbers in the frames. Her students were fully engaged in the experience.

In another lesson, Rader's students are correct punctuation and capitalization in sentences, but rather than do it with worksheets, she has placed them in small groups with manipulatives. The students are given a zip lock baggie with items representing capitalization needed such as question marks, periods, commas, and exclamation marks. The students discuss and justify the placement of items to correct the sentence. The sentence strips are reusable throughout the lesson with other small groups. 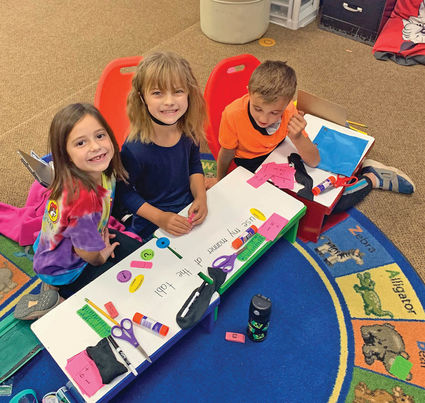 Students are able to collectively construct knowledge by connecting new learning to their fellow students' and their own background experiences. These are moments when students learn to think critically.

Rader does a fabulous job of creating activities that lead to students being actively engaged in their own learning. She is not a Ben Stein (teller). She is a teacher.