By Billie Buckles and Thamazin Harrison

Surviving a pandemic – one game at a time 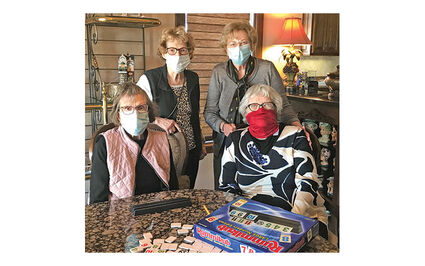 With facemasks in place, these friends prepare for an entertaining game of Rummikube. From left are Paula Bloyd, Thamazin Harrison, Billie Buckles and Elain Schnebel.

January 2020 dawned across America as the usual carefree world that we had always known. We went about our normal activities without a thought, attending church, hugging our family and friends to show the love that we felt, going shopping for groceries, picking up mail at the post office and going to our regular club meetings.

A telephone call to a friend saying "let's meet for lunch at Holder's" promised a time of fellowship and celebrating friendships.

After lunch there was always shopping at the dress shops and a lot of fun watching others try on outfits that could be a little out of the norm.

Visits with out-of-town family and friends were commonplace and thoroughly enjoyed. There were no restrictions.

But then, in early February, news reports brought the first hints of a virus that had been initially detected in China and now was showing up in the United States. We were told not to worry; it was not to be feared and would vanish as suddenly as it had appeared.

But to our shock and dismay, in March the bomb fell. The repercussions in our city and around the world were sudden and extremely confusing.

We were told to quarantine inside our homes, wear masks and practice social distancing by staying at least six feet away from one another.

We learned that the elderly – could we possibly be that old? – and those with preexisting health conditions were most vulnerable to this virus now called Covid-19.

We were instructed to use hand sanitizer and wash our hands regularly with soap, scrubbing them while humming "Happy Birthday" two times through.

Initially, our local Walmart marked a trail throughout the store indicating the direction one should go while shopping, thus encouraging social distancing. It was suspected the virus could be spread from cans and other products, so housewives took everything home and thoroughly washed every item with soap and water. Hand sanitizer was stationed strategically throughout the store. Senior citizens were encouraged to do their grocery shopping early in the morning to avoid crowded conditions later in the day.

And when the news reported that it could only get worse, panic set in. Hoarding began to occur so that a trip to the grocery store was disconcerting as the shelves were mostly barren, especially paper products, hand sanitizer and other essential items. It was alarming and caused one to feel a need to stock up on everything possible.

And there were those who discounted the idea of wearing a mask in public. They showed their contempt even when provided with a mask and asked to wear it while shopping inside the store. Some disgruntled shoppers removed the masks and threw them on the floor after entering.

A couple of weeks went by and still everyone thought this virus would soon go away as quietly as it had arrived. A month later word was that by the first of June things would get back to normal.

Easter arrived and the severity of the virus continued to escalate. Seeing families became ever more difficult. Easter services were experienced virtually. The importance of technology became apparent as worship services were broadcast on television and via Facebook.

It was about this time that Billie and Thamazin, good friends for more than 25 years, felt the need to get more sun. Staying inside was difficult, and they felt that sunshine would not only provide much needed Vitamin D but would also lift their spirits.

Time seemed to pass quickly when they were together. Conversation never waned as recipes were shared, long forgotten memories were talked about, and, occasionally, the national race for president was discussed. The phrase "let's agree to disagree" became commonplace, and the friendships survived.

July 4th was soon upon them, but the usual fireworks shows, barbecues and picnics had to be canceled. Covid-19 continued to gain steam with no end in sight.

With Thanksgiving approaching the trio invited another friend, Elaine, to join their little group. Now a foursome, Rummikub was played alternately with the game of bridge.

Safety continued to be the goal of the foursome. When anyone visited or spent time with others a mandatory 10-day quarantine was required. Of course, being with family and friends was worth every moment of quarantine time.

Throughout these months churches across America had stood largely empty, with worshipers congregating online as the country reported a new daily caseload record as the virus gained speed. Participating in virtual church services was helpful and filled a void like no other.

Christmas! Always the most anticipated time of the year, it now loomed as a solitary event. We knew the usual dinners with others, family visits and worship services would not be possible.

We were alone and sorely missed those Christmases past. Our afternoon play dates became even more important as we determined to get through the holidays with thankful hearts and a new appreciation for our friends.

New Year's Eve reminded us of the domino parties usually held at the Act I Theatre. Revelers would share snacks and drinks, and as the clock struck midnight the party ended with the singing of Auld Lang Syne. Not so this year; we were alone as we ushered in the new year.

Thamazin learned that the local health department was scheduling Covid-19 vaccine inoculations and we were told to call the Woods County Health Department to make an appointment. Rumors had been circulating that the vaccine was untested and not safe; however, we had been following CDC guidelines for more than ten months and were not going to be deterred. 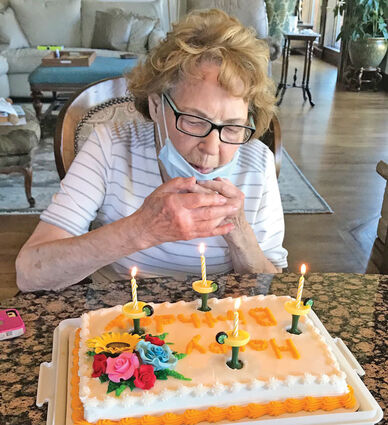 Lowering her mask to blow out the candles, Thamazin Harrison celebrates her brithday with her friends.

January 5th, we arrived at the Alva Recreational Complex to receive our first vaccination and were pleased to see that the process was well organized and went smoothly. Members of the National Guard were placed strategically to direct traffic. Once inside we were directed to a large room that was divided into pods to allow numerous vaccinations to be administered simultaneously. Members of the Air Force were giving shots as well as nurses from throughout the district. This platform should be duplicated throughout the United States. Our second shot was immediately scheduled, and we were reminded that we are extremely blessed to live in Alva, Oklahoma.

As we continue to follow CDC guidelines, we are resolved to embrace the new year with hope and confidence that the pandemic will soon subside. We cannot conceive how our world is going to be transformed by Covid-19 but know that it will be forever changed. We remain confident that love and faith will endure, and friendships will survive.