'The swimming pool shell ... must be replaced' 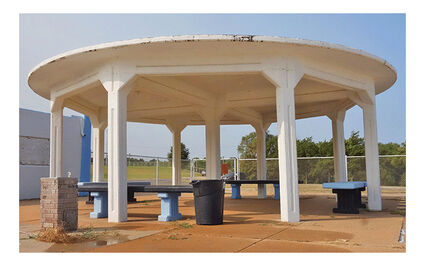 The Task Force would like to keep the pool gazebo even though the engineer says the structure may be leaning one inch from plumb.

"Based on the engineering report, it is the Task Force's position that the swimming pool shell and the systems supporting it must be replaced in order to create a facility that is reliable to operate, easy to maintain, and safe for the public." The five member swimming pool task force stated this finding in a written report addressed to the Alva Parks and Buildings Committee, the Alva City Council and the citizens of Alva.

Councilmember Brandon Sherman, who is a member of the Task Force, read the statement during the Alva City Council meeting Monday night. Other members of the Task Force are Paul Barton, Scott Brown, Renae Green and Jacque Ruhl. Their decision was based on an engineering report they commissioned earlier.

The pool basin entry ramp is too steep to meet ADA requirements and does not meet the current state swimming pool code.

The dive basin geometry is not compliant with the current state pool code.

Part of the pool deck pitches toward the pool which is not compliant with state pool code.

Cracks indicate where settlement has occurred in the deck. The most significant location on the north side of the pool has settled nearly two inches against the below-grade filter building structure.

There is no accessible route from the pool deck into the pool.

Approximately one-third of the entire pool floor was determined to be distressed and in need of attention.

The pool filters have failed. They are significantly corroded and will not filter properly.

The filter building (below the north end pool deck) structure is hazardous. The roof beams have failed and displaced up to several inches. The walls and ceiling exhibit numerous locations where the reinforcement has rusted causing the concrete to spall and crack. This space must be stabilized or demolished and replaced.

There is significant corrosion in the electrical equipment.

The gutter rim elevation varied 2.25 inches from low point to high point. Assuming a recirculation rate of 1,000 gallons per minute, only about one-third of the perimeter gutter – the lowest one-third – will skim water.

The engineering firm considered the two alternatives – to repair the existing pool or remodel and replace.

Repairing the existing pool is estimated to cost about $2.5 million. The report states, "This work does not address the age and inevitable deterioration of the pool basin. The expected life of these repairs is difficult to predict, but further repairs to the pool and deck should be anticipated within 5 to 10 years."

The engineering firm recommends the second alternative. "The extensive deterioration of this aged pool facility does not make it a reasonable candidate for repair," the report states. "We believe replacement is the only feasible option for the pool. However, the bathhouse can be salvaged, pending the results of a structural evaluation."

The Task Force recommends the city pursue a campaign of private donations followed with a matching grant application. Whatever funds are raised will become the budget for the new facility. When that budget is determined, a new facility will be designed to reflect the budget available. 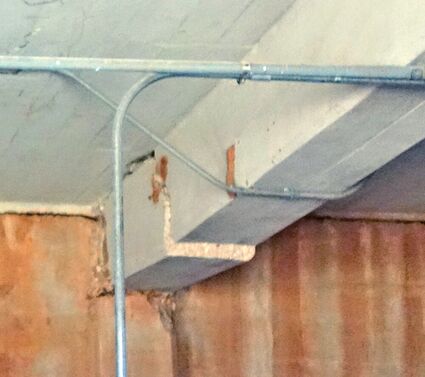 "The building structure is hazardous," says the inspecting engineer of the filtration building. "The roof beams have failed and displaced up to several inches." This photo shows that displacement. The building is located under and supports the north end deck of the swimming pool.

The Task Force likens this strategy to one used by Hennessey, Oklahoma, in the construction of their new swimming pool. During the council meeting, Sherman said Hennessey voted for a one cent added sales tax for a ten-year period to help pay for their pool. With that increase, Hennessey has a city sales tax of 4.00 percent while Kingfisher County collects 1.25 percent and the state gets 4.50 percent. This results in a total sales tax in Hennessey of 9.75 percent.

The Task Force plans additional meetings with the community to present the engineering report and the Task Force recommendation. Additional feedback will be collected.

At the completion of the meetings and feedback collection, they recommend the Task Force be dissolved and a new committee or board, similar in function to the Alva Rec Park Board, formed to replace them. This board would execute the fund-raising campaign, the grant applications and the construction project and then continue oversight of the operations of the new swimming pool facility.