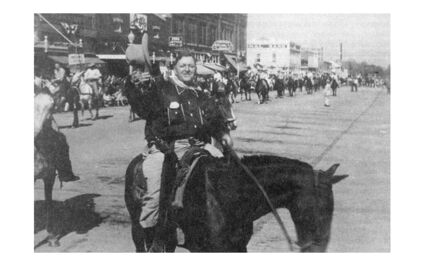 Col. Robin Wilson (Bob) Kirkbride rides in an Alva parade, either Homecoming or Pioneer Days. Photo from "The First 100 Years of Alva, Oklahoma"

From the Cherokee Strip Land Run on Sept. 16, 1893, to the present day, Alva has been home to a number of interesting and colorful characters. One of these was Col. Robin Wilson (Bob) Kirkbride also known as Candy Bob.

Recently, former Alva resident Stan Paris reminisced about his early experiences in Alva and especially his memories of Col. Kirkbride. Paris, who now lives in Sun Lakes, Arizona, was born in 1938 to Alvin and Naomi Paris.

"I was probably around six years old when I met Candy Bob," writes Paris. "I don't remember calling him 'Candy Bob, probably 'Mr. Kirkbride.' I remember him as a big, jolly guy.

"It was in the evening, outside, not too cold, so it must have been in the summertime. There were several kids about my age gathered around a big slab of marble (could have been another type of stone, but it was smooth and flat). He was stirring something in a big pot that was hanging over a fire.

"He was also telling us stories ... can't remember the content. Anyway, at some point he dumped the contents of the pot onto the slab and then spread it out. Turned out to be peanut brittle, and we all loved it.

"He also had a big pole with a hook on it that he pulled taffy for us, which we also loved."

Kirkbride joined a circus in 1906 where he worked in the cook tent as a meat cutter. He learned to make candy from a man working with the carnival. His specialties were taffy and peanut brittle, according to information written by his daughters Margery Clyne and Marydoris Powers in The First 100 Years of Alva, Oklahoma.

Margery Clyne shared his peanut brittle recipe with the Neuman Boys' Choir, and it was used to make candy for a holiday fundraiser for many years in Alva.

Kirkbride gave Paris' father his peanut brittle recipe and it was handed down to Stan who has been making it for friends and family for at least 30 years. "My recipe doesn't have the vanilla in it, and I make it in a four-quart pot," writes Paris. "I can't really tell the difference between with or without vanilla. I also quadruple the butter (at least) which gives it a really rich flavor. My recipe is titled: 'Peanut Brittle ... Recipe from Col. Bob Kirkbride (1887-1947) Alva, OK.'"

A marble slab used by Kirkbride for his candy making may be seen at the Cherokee Strip Museum in Alva. Kirkbride was also featured in the 2019 Talking Tombstones tour at the Alva Municipal Cemetery. The fundraising event by the museum featured Nick Bradt portraying Kirkbride and telling his history.

Bob and his wife Pearl had three daughters: Dorothy who died at age four, Margery (Clyne) and Marydoris (Powers). Currently two of his granddaughters, Robin and Marilyn (Clyne), live in Alva. 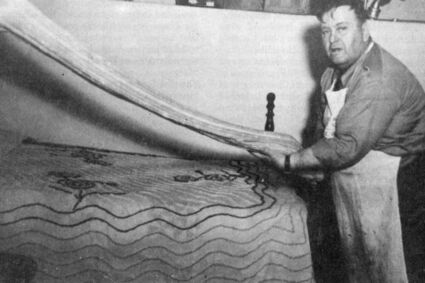 In his younger days, Paris delivered newspapers for the Alva Review-Courier, delivered blocks of ice to residents who had iceboxes, and took tickets at the PIX Theater for Frank Deaton and Jim Kelley. His grandfather was Wes Warren, the fire chief for Alva (He is pictured in a 1924 photo of the fire department). His uncle Bill and Aunt Velma Crenshaw owned and operated the Hillcrest Dairy. His Uncle Bob worked at the Golden Crust Bakery. "Ohhh, the smell of bread baking every morning," Paris recalls.

In addition, Paris says his Uncle Stan and Uncle Gale Warren owned and operated the Little Red Wagon, a residential food delivery. They also owned a farm just north of town where they grew black diamond watermelons. He remembers his Uncle Stan wheeling Clara Wharton around the square in a wheelbarrow as part of a chivaree when they were engaged.

Alva has a rich history. Much of it is documented in exhibits at the Cherokee Strip Museum. The Alva Public Library has a trove of donated photographs they are sorting through and digitizing as well as a number of books with interesting information. You can also find visual representations of Alva's history in the many murals around the community.