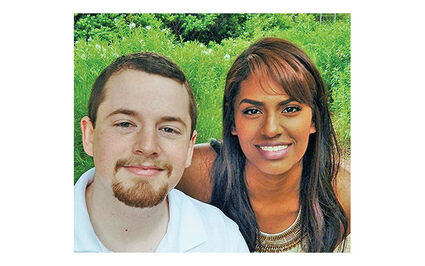 Nissi Jordan (right) with her husband Blake will have samples of her Indian cuisine from Curry Lovers at the First Friday Art Walk tonight.

Growing up in India, Nissi Jordan says cooking was always a part of daily life. Making curries and other Indian dishes provides a connection with her family who are now far away while she lives in Alva.

"The oldest memory I have of observing someone cooking would be back when I still lived in India, watching my mom making Chappathi (similar to homemade naan) for each meal," said Jordan. Chappathi (which may be spelled several different ways) is an unleavened flatbread.

"I believe Chappathi is also one of the first Indian dishes that I helped my mom cook in the kitchen. I must have been six or seven years old. I remember it soon became the task appointed to me for making Chappathi as dinner time approached," she said.

"My dad and my older sister also played a part in my culinary ventures. I still remember my sister saying to me as we made fried Kerala beef, 'the more the ginger, the better the dish.'"

Jordan soon began cooking meals for her family of six. "Every Saturday morning, I would make pancakes, shower them in butter and take it to my parents in bed. I would save the remainder for my sisters as they had a habit of sleeping in," she said. "After I served my parents, I remember and brother and me eating pancakes and watching Saturday morning cartoons."

As a child, Jordan watched her dad plant fresh herbs in his garden and using those as ingredients when cooking. "I believe it instilled a behavior in me of putting in the extra effort to cook an excellent dish from start to finish. It also planted the seed in my cooking to try to use the freshest ingredients whenever cooking," Jordan said.

"As I got older, I would cook and bake for my family and friends at church regularly. It was not until I left home for college that I began cooking more Indian food. I missed being away from my family terribly so cooking my mom's recipe almost felt as if I had a piece of my family with me."

It was while she was at Southern Nazarene University that Nissi met her future husband, Blake Jordan of Alva. "I am pretty sure I won Blake's heart after he tried my Butter Chicken. I remember there was a time he would request it weekly and also for his birthday dinners.

"I was very fearful when we first started dating that he would not like Indian food because cooking it and enjoying it is such a big part of who I am. So I loved that he loved it as much as I did. Blake is the one who motivated me to start serving my curry to the community. He is truly my biggest supporter.

"For years I have had a dream to start a small shop featuring my curry and dessert. Blake and I decided to try and get an idea of how the community would respond to a not-so-typical cuisine."

The couple began taking orders from Facebook and word of mouth to start. For about six months now, they've been serving carryout orders and have received great feedback.

Asked to describe some of her curries, Jordan says Palak Dal is one of the staples she grew up eating weekly. "It's a popular lentil and spinach recipe all across the different regions of India. The dish is cooked with garlic, onions, ginger, cumin and green chili peppers and traditionally served with warm chapatti, then poured over plain rice."

Jordan's next favorite dish is Butter Chicken, a classic North Indian recipe. "The chicken is marinated overnight and charred in butter before adding it to the Makhani (cream) sauce. Once the chicken is cooked, it is set aside to start the Makhani process. "Caramelized onions are a key ingredient for this recipe, which can be tedious but worth it," said Jordan. Next she adds roasted Garam Masala, which she makes fresh. Then she adds tomatoes and lets it simmer slowly. Finally she adds cream, honey and Methi leaves. After all the flavors soak in, she tops it with fresh cilantro. "Tastes heavenly," she comments.

Jordan believes her cooking is a mixture of north and south Indian cuisine. She was born and raised in the north, but her parents were born and grew up in south India. She was exposed to cuisine from both regions. In the north, beef was hardly ever used in cooking. But in south India, nothing is off-limits.

In an effort to stay authentic, Jordan makes all her curries from scratch using only fresh spices. "Every detail from how the onions and chili peppers are cut, the step-to-step detail of when to add and take away spices to produce the most delicious flavors, are very important to me, and I love everything about it," she said. "I can't wait to keep bringing more people together as they indulge with curry."

She is able to obtain some of her ingredients locally at Alva's Market, but a large majority of them have to be purchased online or in the spice markets of Oklahoma City. Jordan tries to find as much as possible locally. She buys local honey from Whittet's Market in Alva. Her husband loves gardening and is participating in the Alva Community Garden this year. She hopes they can plant some ginger and turmeric which she uses heavily in her curries.

Alva residents will have a chance to taste test Jordan's Curry Lovers recipes tonight (April 2) as she will be providing refreshments at the First Friday Art Walk. Stop by the Graceful Arts Gallery, 523 Barnes in Alva, between 6 and 8 p.m.

You can learn more about Jordan's cuisine on Facebook, just search for Curry Lovers. Her website is http://www.currylovers.us or you can call 405-872-6203.