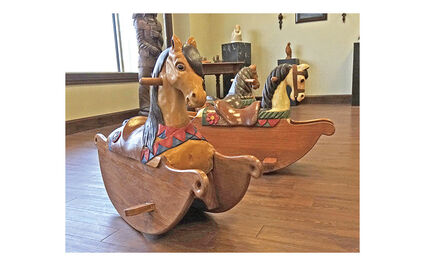 Max Benningfield .is carving these rocking horses for his grandchildren. He still has one to finish. His wood carving may be seen during April at Graceful Arts Gallery in Alva.

It was in the 1930s, the time of the Great Depression with economic hard times. Families didn't just walk into a store and buy toys for their kids. That's when Max Benningfield started whittling his own toys out of woods.

Benningfield grew up on a farm 16 miles west of Alva. His mother would buy Velveeta cheese in wooden boxes and give the wood to him. "You couldn't buy toys in that time, in the thirties, and I made my own toys," he said. When he ran out of the cheese boxes, Benningfield would find a tree limb, cut it up, and start trying to whittle something out of it.

"My dad had a friend in Alva, and he'd come out and visit. He'd sit at the windmill with me where I worked, and he would show me how to use a knife," said Benningfield. "Just different things like the safety of it. Finally, one day he bought me a knife." This shiny new knife came with one condition. Benningfield had to show that he knew how to use it properly and safely.

The new knife spurred Benningfield to "really take off", and he produced his first open-sided box with a ball trapped inside. He says he wishes he still had that box with the ball inside, but he does still have that knife.

Living on a farm, Benningfield had the opportunity to try different kinds of wood for his carving. With his dad's help, he tried cedar, elm and other woods. Eventually he discovered that the harder woods gave him the best results. He especially liked catalpa which he used for the full size cigar store figure currently on display at Graceful Arts Gallery in Alva.

As his interest grew, Benningfield thought he might get into casting so he could make statues like the Ranger on the Northwestern Oklahoma State University campus. Although he doesn't make his larger figures that way, he picked up some ideas in the course.

One of Benningfield's favorite creations was commissioned by a local club. The Alva Research Club approached him about carving a pioneer woman holding a tool. His daughter Mary was his model for the statue. His wife LaDonna, an art teacher, used her talent to draw the figure. Referring to that drawing, he produced a life-size wood carving. 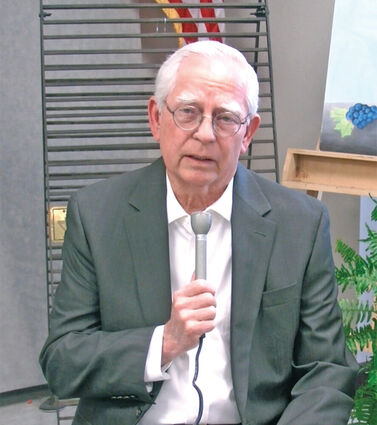 Max Benningfield of Alva describes how he began carving his own toys from wood as a boy and continued to create art from rocking horses to life size figures. There was some trouble with the audio, but his video may be seen at www.AlvaReviewCourier.com.

Benningfield says the Research Club paid him $400 for the piece, but he wouldn't take $1,000 for it today. Pioneer Spirit was presented to the Cherokee Strip Museum in Alva as a centennial gift (1893-1993). The museum loaned the statue for the display this month at the Graceful Arts Gallery.

Currently, Benningfield is making rocking horses for his grandchildren. He's finished three in different colors and still has one to go. These are also on display at Graceful Arts.

During April, you can enjoy Benningfield's unique wood carvings at the Graceful Arts Gallery on the south side of Alva's square.

A small sign posted with his display seems to sum up Benningfield's philosophy:

He who works with his hands is a laborer,

He who works with his hands and his head is an artisan,

But he who works with his hands, his head and his heart is an artist.