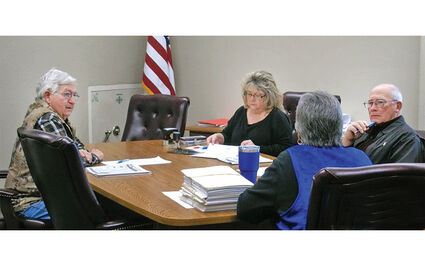 Benson had four companies who filed for a Freeport Exemption. She said property being shipped through Oklahoma (and Woods County) that comes in and goes out within 90 days is exempt from property tax.

The application by Spire Missouri Inc. was denied. The company business is natural gas and storage. Benson said Woods County has never done an exemption for oil and gas. Olson noted that Benson took that issue to the state Supreme Court and won.

Next on the agenda was a vote on extending the equalization board session through June or as long as needed. Benson said she is still receiving tax protests. She received 11 in the mail in one day from one tax company.

Shirley said, "The state needs to fix this deal." He has approached a state legislator about working on a bill to change it.

He discussed the protest hearing process with Benson. Companies can have up to three dates to meet with the equalization board concerning a protest. Usually they miss the early dates for various reasons. "It just drags it out," said Benson.

Shirley asked how much time must be allowed between dates, and Benson said ten days. He suggested Benson set the dates within one month to speed up the process. If the protest cannot be resolved through these hearings, the matter goes to court.

"It just kills the schools," said Shirley. "They can't get their money." Ad valorem taxes tied up in protests are not paid and cannot be distributed to the schools.