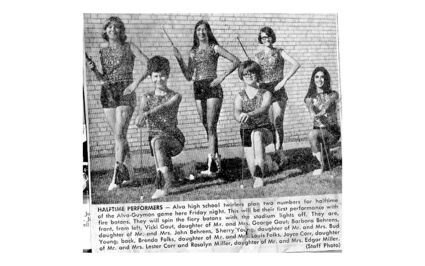 In the school year of 1966, the Alva High School Band decided to add a team of twirlers or majorettes to the marching band, the first time since the 1940s. The twirling team was selected and included Joyce Corr, Sherry Young, Connie Henderson, Brenda Folks, Sandra Yohn, Donna Smith and Kathy Sumpter. 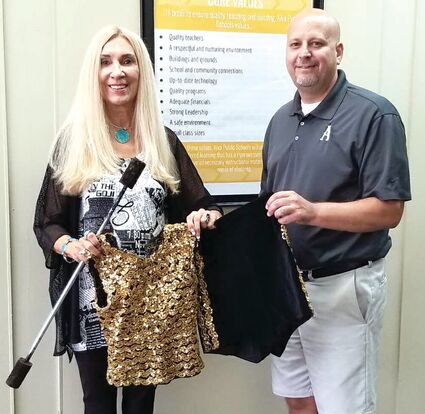 Joyce Corr and Mr. Tim Argo, superintendent of Alva Public Schools, hold the uniform and fire baton from the 1966 AHS Twirling Team found in Christine Corr's belongings by her brother and sister-in-law Paul and Deb Corr.

Joyce Corr remembers her mom, Christine Corr, and Sherry Young's mother, Dorothy Young, volunteering to make the uniforms and helping them select and buy the fabric to do so.

In 1967, Joyce's father, Lester Corr, encouraged that year's team to learn how to twirl fire batons and volunteered to handle all of the details necessary to make it happen. So with his assistance the 1967 AHS Twirling Team twirled the fire batons at the Friday Night Halftime Shows.

Recently, Paul Corr, Joyce's brother, and his wife Deb Kramp Corr, discovered the uniform among many of the items saved by Christine. Since the uniform looked almost perfect, they held onto it. Very soon after, Paul and Deb found the "fire baton." Both have become a very important part of Alva High School history.