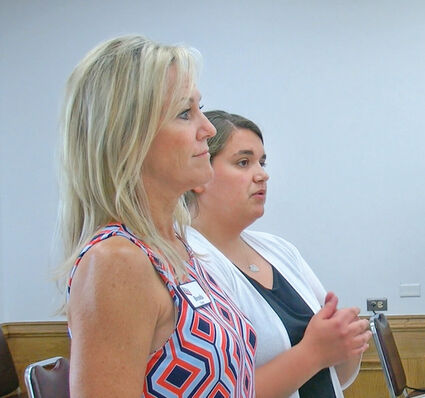 A new generation of Alva Mural Society members is planning a new event for September. Brenda Hood (left) and Erin Davis present their plan to the Alva Tourism Committee.

A new generation of Alva Mural Society members is changing up the focus of the organization. Traditionally, Alva's many murals have depicted scenes from the community's history. While the society will continue to add to that collection, they are trying some new ideas. Recently, they hung their first wrapped mural at the Cherokee Strip Museum.

On Wednesday Brenda Hood and Erin Davis told the Alva Tourism Tax Committee about their newest plan. A three day event with three artists is planned for Friday-Sunday, Sept. 24-26. The artists will be painting murals at three locations, the Farmer's Cooperative, City Hall and the Exotic Heatwave.

The murals are designed for a younger audience with bold, bright graphic styles. They can be painted quickly and are expected to last about five years. Then they will be replaced with new murals. Hood and Davis said these types of murals are popular as backgrounds for selfies.

The fest will kick off with a Meet the Artists night from 6 to 8 p.m. Friday at Graceful Arts Gallery in Alva. Saturday events begin with a 5K run and fun run starting at 8 a.m. There will be food trucks downtown all day, and live music will begin in the afternoon. Since there's a Ranger football game at 6 p.m., the music will probably be moved up to begin earlier. On Sunday, the murals will be completed with artists signing their finished work at 1 p.m. at City Hall, 1:20 at the co-op and 1:40 at Exotic Heatwave. The locations are downtown except for Exotic Heatwave at 1016 Noble.

When asked if building owners chose the designs, the women said the only request was from F.M. Erikson (Exotic Heatwave) who first asked for a cattle drive. After determining there were plenty of cattle in other murals, Erikson asked that John Wayne be part of the design.

The mural society asked the Tourism Committee for $6,500 to cover wall preparation, advertising, hotel rooms for the artists and the bands. Other revenue will come from t-shirt sales and the fun run. The Alva Mural Society will use $9,790 from their account for the remainder of expenses. Those funds are donations by various benefactors.

Committee members were enthusiastic about the event and voted to provide up to $6,500.

The other funding request did not fare as well Wednesday. Cody (Shorty) Dees spoke on behalf of the Western Sports Committee LLC which also promotes the Bull Battle. This is the third year for the golf tournament which was planned for Saturday, Aug. 21. By Wednesday, 15 teams were registered for the one-day four-man scramble tournament.

Dees showed buckles and knives provided as prizes to the winners of the tournament. Winning teams also participate in a money payout. Up to $1,583.57 was requested for the event to pay for buckles, knives, golf towels and print advertising.

Committee member Melinda Barton asked where the players come from besides Alva. Dees listed Kiowa, Medicine Lodge, Woodward and Waynoka. She asked if any of them stay overnight in Alva, and he didn't know.

Dr. Charles Tucker said it appeared the tournament was self-supporting for the first two years and asked what had changed. Dees said they were "trying to get the payout to where we want it to be." He said in the past they did well to break even.

When there were no more questions, Chairman Norville Ritter asked for a motion. There was none. He said he would wait four minutes for a motion. Tucker told Dees it was a good project but it doesn't qualify as tourism and has no overnight stays.

At the end of the designated time, Ritter said, "I think the committee thinks it doesn't meet the parameters." The request died for lack of a motion.