The Drs. Burk are ready to see patients 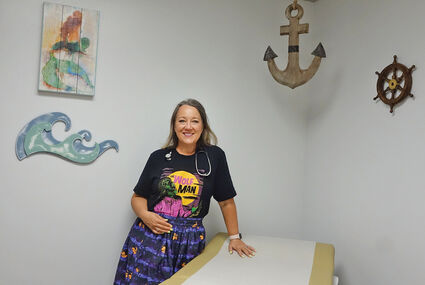 Chris Burk, MD shows off her "pirate" exam room at the Professional Building in Alva. She admits she loves Halloween and is sporting her Wolfman shirt and wolves baying at the full moon skirt.

A little bit of fantasy helps the medicine go down! At least that seems to be the philosophy in the exam rooms of pediatrician Chris Burk, M.D. She and her husband Scott Burk, M.D. are moving into Suite J in the Professional Building in downtown Alva. Not to be outdone, Scott has themes for his exam rooms, too.

Chris has a pirate room where an anchor hangs from the ceiling and the walls are adorned with a lobster, a shark and other aquatic themes to complement a couple of pirate ships. Harry Potter is the focus for the second exam room. Chris said she took a quiz and found she belongs to the Hufflepuff house so she displays that coat of arms on the wall along with a drawing of wands produced by the Hufflepuffs.

The hallway is decorated with the Wizard of Oz in mind. A "ruby" slipper perches on her desk waiting for the right spot.

"I tried to pick things that were unisex and eternal," said Chris. "Everybody loves pirates. Everybody loves wizards. I had hoped everybody would love Wizard of Oz; however, a lot of kids don't know what that is anymore. They're familiar with the Yellow Brick Road but not the movie."

Scott's exam rooms are a little more serious, befitting his 18 and up age patients. One features Oklahoma signs and memorabilia including a large metal windmill wall piece. Some OSU things, his undergrad school, are tucked around the room. The second exam room is all about Montana where the

In the hallway among the medical licenses, you'll see a large photo of all the 1995 graduates of the University of Oklahoma med school. Since they were married and shared the same last name, the Burks are pictures side by side on the top row.

As we sat down in her office Thursday morning, Chris fanned herself. She'd just finished unloading boxes of books and placing them on shelves. She wore a black Wolfman t-shirt with a skirt featuring howling wolves outlined against full moons. She commented that Halloween is "very much an obsession." How about other holidays? "No, it's all about Halloween," she said. "Halloween is the best."

Later as we toured the area, she introduced "Newman" the skeleton hung just inside a door down the hall. She said one of her patients, a two-year-old boy, named the friendly, not scary, arrangement of bones.

Scott joined us, and we talked about their return to Alva and what they've been doing. The Burks had a practice here but moved to Montana in 2005. "We've always loved Alva, and we wanted to be near family," said Chris about their return. "Mom and Dad are of the age when they need some extra help, and we're in a position to help them so we're very pleased to come back and be able to do that."

Scott who grew up in Tulsa and Chris who is from Waynoka both went to Oklahoma State University for their undergraduate work. That was followed by the College of Medicine at the University of Oklahoma. They spent two years at the Health Sciences Center and then transferred to the OU satellite in Tulsa for the second two years. Their residencies were also in Tulsa.

"I did military service for four years," said Chris. After residency, they moved to Manhattan, Kansas, and she was stationed at Ft. Riley, Kansas. Scott worked in private practice during that time. The Burks followed that with a year in Montana.

"Then Scott's parents got very ill," said Chris. "His dad developed diabetes, and we decided we needed to come home for a while." Scott's late parents lived in Tulsa, and he has an older brother who still lives there.

After moving back to Montana in 2005, the Burks had private practices with Chris in pediatrics and Scott in internal medicine. They had partners who shared the expenses which provided some coverage when they wanted to take time off. However, Chris was the only pediatrician. "I did everything for eight years, carrying my phone, everything by myself," she said.

"And we loved being up there (Great Falls, Montana)," said Scott. "We learned that we really liked camping out in the middle of nowhere, not in a campground but just go up in the mountains and pull off somewhere. We really enjoyed that." Chris added that they'd take their dog along and do lots of hiking.

Asked about encounters with wildlife, Chris said, "We saw a bear once."

"It was not a close encounter," said Scott. "We heard some wolves, and that was about it."

"Usually it was exciting if we saw squirrels, porcupines, deer, a moose every now and then," added Chris.

Now that they've moved back to Woods County, the Burks will be near more of their family. Their oldest daughter, however, lives in the state of Washington.

"Sarah is an architect, fully licensed, in Seattle working for a great firm of up there," said Chris. She said there's a direct flight from Oklahoma City to Seattle.

Middle daughter Rachel is going to grad school at Oklahoma State University for a master's degree in counseling for geriatric dementia care.

The youngest daughter Lauren is at Oklahoma Christian University in Edmond. Readers may remember a story in the Alva Review-Courier in May 2019 about Lauren's fight for her life when she contracted Guillain-Barre syndrome, a rare neurological disorder. She is graduating a semester late due to her illness and recovery.

"She'll graduate in November with her degree in communication design which is a form of graphic design," said Chris. "It specializes in illustration and logo formation. And she's 4.0. We fully expect her to start building a family after that. She has a fiancé."

The Burks are currently living with Chris's parents, Don and Judy Ferguson of Waynoka, in the farmhouse where Chris grew up. Judy's failing eyesight makes it difficult for her to get around the house so the Fergusons have opted to downsize. A new modular home has been set up nearby, and as soon as electricity is hooked up, the Fergusons will move there while the Burks take over the farmhouse.

Chris is planning to have office hours Monday through Wednesday. She said her nurse knows how to reach her if anything comes up on Thursday and Friday. "I'm very open to extending, if my practice gets full," she said. She wants to be available the latter part of the week to drive her parents to doctor's appointments and help as needed. "So far though, they have not been very cooperative in choosing doctor's appointments on days when I'm off," laughed Chris.

Scott will be in the office Monday through Thursday which will be full time since they both work ten-hour days.

As a pediatrician, Chris Burk specializes in patients up to age 18 "and no pregnancies. Neither one of us do pregnancies," she said. "I don't do gynecological care. I didn't have enough practice at it to be good at it, and if you're a teenager, you sure don't want somebody who's not well-practiced to come and take care of your special needs as a woman."

Chris said she sometimes continues care up to age 21 for patients who have a childhood illness like cystic fibrosis or Down syndrome. "I'll keep them until they're 21 to help to transition over."

As an internist, Scott sees patients from age 18 on up so the two of them cover the whole spectrum.

Their offices are located in the Professional Building just across from the Alva City Hall. On Thursday, it was a bit hard to find because signage had not been installed. But signs should be up soon. Their direct phone is 580-430-3333 or you can call Share Medical Center at 580-327-2800 and they will redirect your call.

"I don't know if we'll be camping in Oklahoma," said Chris. "It's so hot! I do a lot of sewing. I do a lot of reading." She's excited because she has set up a sewing room.

"Right now the farm's leased to somebody else," said Scott. "As soon as the lease is up, I'm taking it back over. I plan to run some cows for fun."

Scott plans to do plenty of outdoor grilling. "We built a fire pit and a party patio so when the weather cools down a bit, we'll all sit around the fire at night and cook out," he said. "No TV," interjected Chris.

"I like cars, too," said Scott. "I've got a couple of Mustangs. One is kind of rare. They only made 200 or 300 of them. It's a Susan B. Coleman (model) which is the breast cancer awareness. It's a special edition for breast cancer."

"It's got the pink ribbons on it," said Chris. 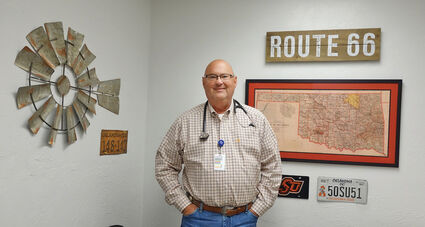 OSU grad Scott Burk, MD shows off his Oklahoma heritage in thiis exam room at the Professional Building in Alva. Several of the maps he collects are displayed on the walls of the office suite.

"It's mine, but I let him claim it," insisted Chris.

Scott said his other Mustang is newer and "real fast."

Unfortunately, the Mustangs are still in Montana and won't arrive until the end of the month so the Burks weren't able to show them in the Big Cruise and Car Show. But they entered car shows in Montana and look forward to doing the shows here. "I even have a pink dress that matches 'my' car," said Chris.

The Burks say they are big OSU fans, and their pick for pro football is the Kansas City Chiefs. Chris pointed out a small OSU Christmas tree with orange foliage nestled in the top of a box in her office. She proudly displayed a small football player figure on her desk wearing No. 15. "This is Patrick Mahones," she said.

"If they see a white Jeep with Kansas City Chiefs stuff on it, that will be me driving around," said Chris.