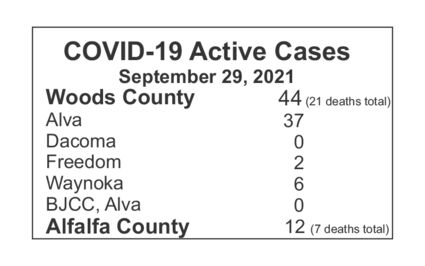 Although the number of active Covid-19 cases in the state is declining, Woods County increased by eight this week. According to the Oklahoma State Department of Health (OSDH) dashboard, on Sept. 29 the state had 16,310 active cases compared to 20,093 a week ago.

Woods County increased to 44 cases. According to the Woods County Health Department Facebook page, there were 32 new cases in the county. Woodward County also increased by eight to 102. Other surrounding counties had decreases with Alfalfa County listing 12, down two. Harper County was down three at 23. Major County decreased by ten at 26.

Dacoma and Freedom stayed the same with Dacoma at zero and Freedom at two cases. Waynoka increased by three to six active cases. Alva was up five at 37 and one death was added for Alva.

Bill Johnson Correctional Center in Alva still has no active cases among inmates according to the Oklahoma Department of Corrections website.

Northwestern Oklahoma State University posted on Friday, Sept. 24, that there were eight active cases across the three campuses in Alva, Enid and Woodward. Of that total, seven were students and one was an employee.