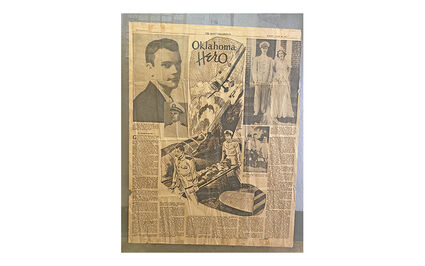 This April 1942 article from the Daily Oklahoman describes the experience of Dr. J. B. Smith of Alva at Pearl Harbor. The article was donated by his niece and nephews to the Alva Regional Airport for display.

The airport museum is a local treasure that few know about. It exhibits news articles and donated items documenting local and area aviation history. Pilots and passengers flying into the airport enjoy the glimpse into Alva's rich aviation history. The public is welcome.

After his mother died when he was 13, Dr. Gene Smith, Sr. was raised by his father, JB Smith Sr., and his stepmother, Lillian Smith. When the US entered World War II, he elected to enlist in the Army Air Corps. Gene had completed a couple of years of college and was accepted into pilot training. After his basic and primary training, he was ordered to multi engine training. He demonstrated such skill there that he was asked to stay on as an instructor. Then Gene was assigned to Ferry Command. Ferry Command transported personnel and equipment wherever they were needed.

Gene was later transferred to Karachi, India, where he was Base Operations Officer. His primary duty was to assign missions to pilots and crews flying the "Hump," a dangerous route over the Himalayan Mountains, carrying supplies from India to China. On the back of Gene's flight jacket is embroidery in Chinese writing that was called a "blood chit." The writing stated that the person wearing the jacket was an American and that anyone who delivered him safely back to his lines would receive a reward. The Smith family donated that jacket to the Alva Airport Museum.

After the war, Gene attended the Illinois College of Optometry, graduating in 1952. He moved back to Alva and went into practice with his father JB Smith Sr. JB Sr. had moved to Alva in the early 1910-20s from Kansas and he retired from the optometry practice around 1955. Gene kept active in the local flying community. One of his first airplanes was a Stinson 108, a fabric tailwheel four-place plane. Gene had several aircraft partners over the years which included Dr. Leo Joe Proctor and the B&G Company. The B&G company consisted of Gene, Beatty Silvius, Rex Gard and Bill McClure, and they owned several aircraft including a Cessna 170, 172, and 182 Skylane. The 170 and 182 were rebuilt aircraft purchased from Kinzie Industries.

Gene and his wife Doris lived in Alva until his retirement then they moved to Edmond. They had three children: Gene R. Smith Jr., MD, of Stillwater, Teresa Smith of Shawnee, and Larry G. Smith, DDS, of Alva. 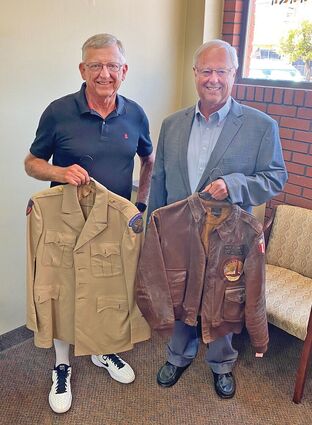 Dr. Gene Smith Jr. and Dr. Larry Smith hold jackets worn by their father, Gene Smith, during World War II. They and their sister Teresa Smith have donated the jackets to the museum at the Alva Regional Airport.

JB Smith Jr. was already a doctor in the Navy and stationed at Pearl Harbor when it was attacked on December 7, 1941. He distinguished himself that morning rushing among the wounded, dead, and dying to save as many as possible. He received a citation from Admiral Chester W. Nimitz describing his heroism, "For distinguished service in the line of your profession during the attack on the United States Pacific Fleet in Pearl Harbor, Hawaii Territory, by Japanese forces, on December 7, 1941, when by your commendable action you assisted most ably in the face of enemy bombings and strafing in caring for the wounded men from the Naval Air Station and nearby disabled ships."

After the war JB Jr. completed an internship in ophthalmology and later set up practice in northern California. He died of natural causes after living a full life.

The Alva Airport Commission and Museum appreciate the Smith family's thoughtfulness and generosity in sharing these stories and items with Alva and the aviation community.

The article about JB Smith Jr and the jackets from Gene Smith Sr. will be on display at the terminal building. Please stop by to see these items and other airport and area aviation history. The museum is open during normal operating hours.