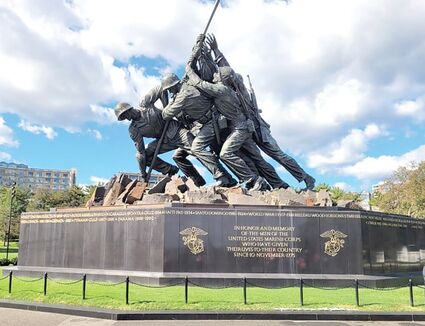 During his Kansas Honor Flight tour of Washington, D.C., Vietnam veteran Bill Nelson said he was impressed with the United States Marine Corps War Memorial (Iwo Jima Memorial). The memorial was dedicated in 1954 to all marines who have given their lives in defense of the United States since 1775.

Fifty years ago 1966 Kiowa High School graduate Bill Nelson never dreamed he would return to Washington, D.C., 50 years later as a veteran honored as part of the Kansas Honor Flight.

Nelson said he was one of approximately147 veterans who flew out of the Dwight D. Eisenhower National Airport in Wichita to Washington, D.C., for a whirlwind tour of the monuments and memorials, many of them tributes to American veterans who served their country. Their trip was Oct. 18-19.

When their plane arrived in D.C., Nelson said, "Everyone was cheering for us. It gave me goosebumps." He said the honor f...