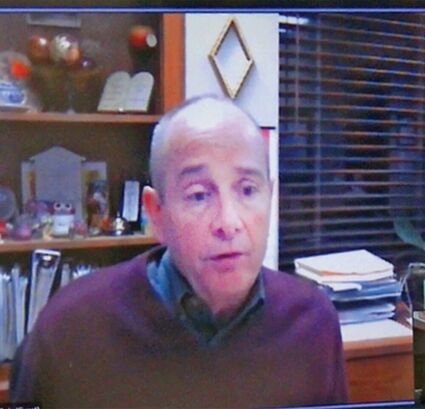 Chris Angel of Angel, Johnston & Blasingame, PC, goes over the FY19-20 audit during the Alva City Council meeting Monday. He appeared through an internet link.

The result of the City of Alva audit for the fiscal year from July 1, 2019, through June 30, 2020, was not a surprise to city officials. That fiscal year ended a little over a month after the FY18-19 audit revealed about $2.2 million had been borrowed from other funds to make up deficits in the general fund and the utility authority fund. The May 2020 revelation came less than three months after the city's previous business manager resigned to work for another city.

Monday night, Dec. 20, the Alva City Council heard a report from Chris Angel of Angel, Johnston & Blasingame, PC, an accounting firm from Chickasha. He revealed the continued borrowing in FY19-20 brought the total to $2.5 million. Since the city first learned of the problem in May 2020, steps have been taken to pay back those restricted funds.

Angel appeared through a video link, but technical problems kept the sound from working. City Business Manager Angelica Brady called Angel on a cellphone that was put on speaker for everyone to hear.

Angel said while people think an audit is to check every single thing, "the purpose is really to give an opinion on the financial statements. These financial statements are used by third party individuals that want assurances that the information they are getting from the city is answered correct.

"The primary purpose of our audit is to look over financial statements and again give an opinion whether or not these accurately reflect the financial condition, your assets and liabilities as of June 30, 2020, and the activity for the year ending June 30, 2020.

"On the front of that report, our opinion letter does say that we believe a third party user can rely upon these financial statements to accurately reflect what happened last year (FY19-20). There are no major misrepresentations within the report."

However, Angel acknowledged fund borrowing, "In the report we also did make the comment about the going concern, the fact that the finances are still very difficult and that we've got a little bit of a battle to get ourselves back in a situation where we'll feel comfortable that we'll be able to repay all the debt and all the funds that we borrowed from at this point."

He said some adjustments were recommended. "During the audit process we felt that there had to be a change in presentation of the pooled cash accounts. The general fund and the utility authority had borrowed money from various cash accounts in order to meet operations of the last few years.

"When we initially got the financial statements, it was showing that there was cash in these various different cash accounts, the accounts other than the general fund and the utility authority had cash. But actually the cash was, for the most part, not there because the cash had been borrowed by the general fund," he said.

"So it showed cash in this account and then showed an overdraft balance in the general fund and the utility authority. But the pronouncements are pretty clear that what you really need to do is show the cash if it's been borrowed, go ahead and reduce the cash in all those individual accounts and just replace that basically with a note receivable where the general fund owes that.

"That was the adjustment we made. It didn't change the net income but we felt it more clearly showed the cash position and felt it was in line with national standards."

"The cash in the General Fund and the AUA (Alva Utility Authority) is depleted and operations are being supplemented by using funds that have restricted purposes," the audit report states.

Angel said, "Some of this was hidden or wasn't readily obvious because of the use of pooled cash. There's nothing wrong with pooled cash. Pooled cash is basically saying let's put different funds' cash all in one account."

He said pooled cash can make writing checks and reconciliation easier. It's also easier to pool excess money from several funds into one investment. He said that a lot of communities use pooled cash accounts although only a few of the ones he audits do it.

"But in doing this what also happens is if one account runs out of money, they can write a check and it will clear the bank because there's actually cash of other funds that is in this bank account. And that's what's actually happened here," he said.

"So what needs to be done, and I think has been implemented, is a process of tracking that very carefully so you know exactly where you stand on every account every month and that's communicated to the finance committee and they can monitor the progress on that."

Angel pointed out the city's response, which states, "For FY20-21 they City implemented a hiring freeze and budgeted for a surplus to begin repayment of borrowed funds. The City was able to make a repayment of $371,081.71 at the end of FY20-21.

"For FY21-22 the City budgeted for a surplus to continue repayment. The City is placing 5% of sales tax into a savings account on a monthly basis to ensure an annual payment will be made."

On the second finding, Angel said when utility rates increased July 1, 2019, the residential rate change inside the city limits did not get made, and the error was not caught by the city until the subsequent year's rate changes in July 2020. The estimated under-collection for the year using a 2,000-customer base is $52,800 to $120,000. The monthly base increase was $2.20 per customer. Depending on the customer's monthly water use, the difference in billing could be significantly higher.

The auditor's recommendation is that when new utility rates are changed in the billing system, the city should manually calculate and test each rate to verify the (computer) system is billing each customer correctly.

The city management response is, "The city has implemented staff procedures to verify each fee schedule has been updated correctly upon a change."

There were two other findings listed, but these referred to the Alva Hospital Authority (AHA) audit. The AHA audit is done by a different accounting firm with the findings of that audit then included in the city's audit.

Before opening the floor for questions, Mayor Kelly Parker said, "I just want to clarify, Chris. I know what you're talking about but that is the year ending June 30, 2020. It's not the last fiscal year."

Councilmember Taylor Dowling asked for clarification on the Receivables listed on page 33, particularly the allowances for uncollectable accounts. He was especially interested in the ambulance receivables since the council was addressing fee adjustments later in the meeting.

"That is an amount from years and years and years, over a decade I think on that on receivables," said Angel. "There's a huge write-off. Generally on most of those if you don't collect within a year, it's very rare you're going to get one. Every once in a while you'll have somebody come in and pay over a year but very rare."

Dowling said, "On page 43, I was hoping you could cover those transfers and then on page 44 the interfund loan. Where are those pulling from and the different classifications, and do they relate to the number we're talking about that came from the pooled cash accounts?"

Angel said the internal transfers between funds were not subject to repayment. Three on the list were earmarked sales tax that was transferred from the general fund to the hospital authority, the scholarship fund and the economic development fund. The others were operating transfers.

He confirmed that the interfund receivables and payables listed the borrowed amounts totaling $2,572.528 to be paid back. Amounts borrowed by the general fund were:

Borrowed by the Alva Utility Authority:

It was noted the city has made arrangements with the airport to pay them back with an annual payment of $121,422 with an interest rate of 3% through June 30, 2030.

Councilmember Daniel Winters said, "I don't have a question but I would like you to know that $2.5 million is the number that we anticipated prior to this that we've been paying back. That's not an increase from what we expected. Being a year and a half out, that's a little unclear."

"That's correct," said Mayor Parker. "Chris (Angel) made mention of what we indicated in the management letter of the measures that we would take to correct issues. I think we said in the finance committee that on June 30, 2020, which is the year we're talking about here, our pooled cash balance was almost $151,000. As we sit here today, our pooled cash balance is over $2.7 million.

"So we have made significant strides to getting those inter-department borrowed funds ... to get us in a position where those are repaid.

"I do want to give credit to the staff and management for making sure they were diligent with the purse strings over the last year and a half because we've had to really sacrifice in order to get to this point."

Councilmember Randy Stelling asked if the city had a "ballpark idea" of how the borrowed money was spent. Parker and Brady said it went into the city's general fund and the utility authority fund.

Dowling asked if the transfers listed on page 43 are normal transfers. Parker and Brady said the amounts vary.

"My opinion would be that those, even though it may not be required to pay them back, it is our intent to pay them back, some of them," said Brady. Obviously, the earmarked sales tax transfers don't require being paid back.

With no more discussion, Winters made a motion, seconded by Stelling, to accept the 2019-2020 annual audit. The motion carried by a 7-1 vote with Troy Brooks casing the only dissenting vote.

A video of the entire city council meeting, which lasted about two hours, may be seen at http://www.AlvaReviewCourier.com.