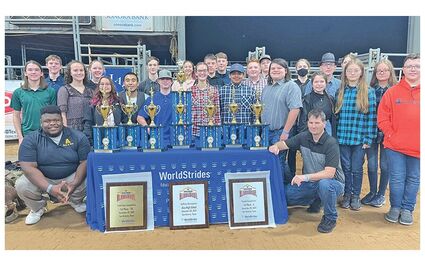 The Alva Band of Gold shows off the awards and trophies collected in their trip to the Alamo Bowl in San Antonio, Texas.

A tired but jubilant group of students, teachers and parents returned to Alva Thursday night from San Antonio, Texas. The Alva Band of Gold was greeted at the south edge of town by a police escort and a group of fans honking their horns. The band was returning from a performance at the Valero Alamo Bowl where the OU Sooners defeated the Oregon Ducks Wednesday night.